Last week we told you about a new puzzle game called Puzzle Breaker for iOS. The free-to-play title was nothing groundbreaking but it seemed worth mentioning on a slow news day. However, after having the game installed on my phone for over a week I have become addicted. 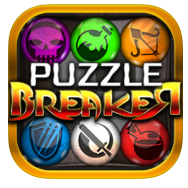 I test a lot of games throughout the week and most get deleted in a few days never to be writen about, but Puzzle Breaker wouldn't go away. The game is a simple match-three title with an RPG twist. The RPG element and the game's three levels of difficulty is what give it its replay value. Puzzle Breaker is also a prime example of a freemium title done right. You begin the game with only five lives, and you must wait 20-minutes to regain one those lives every time you lose. Waiting 20-minutes may not sound like fun, but you don't have to wait if you keep on winning.

The penalty of having to wait for lives to advance in the game actually adds another strategic element. You can either piss away all your remaining lives trying to complete a level you're stuck on, or you can replay some lower levels in hopes to earn gold so you can level up your abilities (Anyone who has played an RPG like Final Fantasy should be familiar with this technique). This is where the game becomes addicting. Not every win earns you gold so you can spend hours fighting low level creatures in hopes to earn enough to level up one of your six abilities. 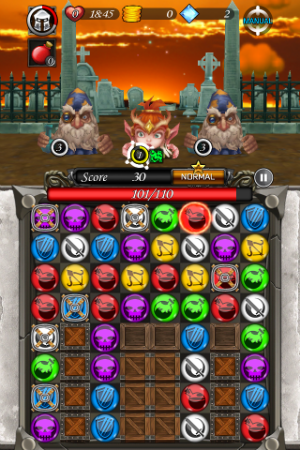 The game is like any match-three title where you must swap colored tiles horizontally or vertically to make sets of three or more of the same color. Instead of earning points for making matches, Puzzle Breaker is played as an RPG battle game. The match-three element is how you attack and defend yourself from your enemies. In the game, each tile has a different icon with a different ability. When you make a match that ability is released on your enemy in the form of an attack. For example, blue is a shield icon and yellow is a bow. When leveled up, the shield icon can delay the movement of your enemy while also inflicting damage.

Unlike most match-three games you can also move any tile without making a match, this is the other strategic element of the game. Each of your enemies have an attack counter, so it may be in your best interest to move a heart icon instead of making an immediate match so you can regain health during the next round. Sometimes you have no choice but to move an icon without making a match because there are no moves left to make.

You also have special abilities like a rage mode which allows you to move any icon in any direction for a limited time, and you can create super weapons by making a match of five or more. The game doesn't include any achievements or Game Center support but it does keep track of stats such as total score, monsters killed and so on.

As with any free-to-play mobile title you can cheat by buying premium currency in the form of diamonds or extra health and gold, but these in-app purchases are not required to enjoy the full game.

Puzzle Breaker for iOS is available for free on the Apple App Store. It is compatible with all devices running iOS 6.0 or later.