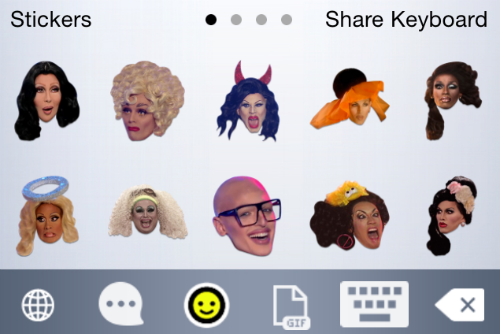 There have been a lot of third-party keyboards released for iOS devices ever since Apple opened the walled garden in iOS 8, but none of them are as fabulous as RuPaul's Drag Race Keyboard. The new iOS 8 keyboard from Logo allows Drag Race fans to quickly send images and animated GIFs of heir favorite queens to their squirrel friends and family.

The keyboard is free to download and easy to use, but you will have to enable it after installing it on your device. To enable any third-party keyboard navigate to Settings > General > Keyboard > Keyboards and tap the "Add New Keyboard..." panel. From here you can enable any third-party keyboards that you have downloaded by tapping their name and giving them permission to access your device. Once you have added RuPaul Keyboard to your active keyboards list, you will need to go back to the Keyboards screen and tap its name, then tap the "Allow Full Access" slider so it is ON / GREEN.

You can now switch between your stock and RuPaul keyboard by tapping the world button in the Messages apps.

RuPaul's Drag Race Keyboard features more than 20 emojis, images and GIFS for you to choose from. The app supports all devices running iOS 8.0 or later.

Don't forget to check out season 7 of RuPaul’s Drag Race on Mondays at 9/8c on Logo, or on Tuesdays at logotv.com.