How to Beat Puzzle Breaker Level 47

If you listened to us and downloaded the RPG, match three game Puzzle Breaker then you may have found yourself stuck on some of the higher levels in the second world. To reach the second world you must complete the final three quests in level one. While this is no easy task, you do have the option to spend diamonds and skip the quests to advance, but levels 31 to 70 are no walk in the park either. 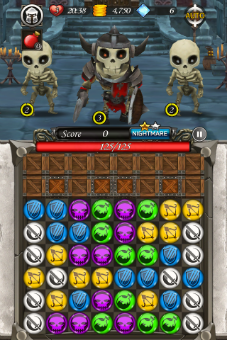 You will have to play certain levels in world 2 over and over until you figure out a strategy, power up or get extremely lucky. However, level 47 is the first level where getting lucky is not an option. Nobody enjoys getting stuck on a level that seems impossible to beat, so here's how to defeat it.

Unlike the final quests on level 1, you're not going to accidentally guess the right combination on level 47 to open the ceiling, which allows more icons to fall so you don't run out of moves. Level 47 requires a precise amount of strategic combinations to blast away the tiles blocking your icons. Below is a video tutorial demonstrating what you have to do to advance to level 48. This is tricky, so make sure you open the app and get ready to follow the tutorial move by move.

Level 48 and beyond is no cake walk either, but now at least you have an idea of what you need to do on these type of levels. Good luck!