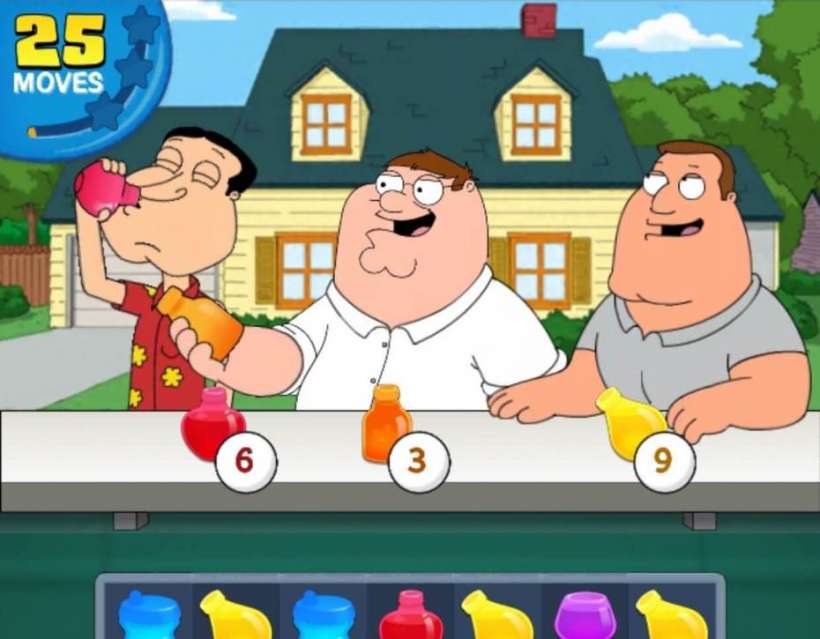 It's always disappointing when a new game based on your favorite television show is announced and it is revealed to be a match 3 title. Match 3 games can be tedious if not done correctly, and they tend to be a lazy way for some developers to make a quick buck. I'm not going to claim Jam City isn't guilty of cashing in on the Family Guy name with another uninspired match 3 title, but I do have to admit that I play it a lot.

Another Freakin' Mobile Game is a bit like Look Who's Talking... Yes, the 1989 Kirstie Alley and John Travolta movie starring a talking baby. On paper the game and movie both seem like horrible ideas, but I keep finding myself drawn to each of them.

The game is your typical match 3 title with a few different repeating boards, achievements, IAPs and voices from the show. It includes all your favorite Family Guy characters, including supporting members such as the Evil Monkey and Ernie the Giant Chicken.

The boss battles tend to suffer due to the UI not being battle friendly. The gameplay can be too slow for fast-paced matching, and there are too many mistakes. It is easy to accidentally swipe the wrong way when you're moving quickly to defeat a boss. You will have a lot blown moves in this game which is very frustrating on the later levels, and especially on the boss levels. Luckily there aren't a lot of boss battles, and you can normally beat them after a few tries with some luck.

The music is repetitive and the catch phrases get old real fast. This is one game where you'll want to disable the sound in favor of your favorite Music app playlists.

So why do I keep finding myself going back to Another Freakin' Mobile Game? Because of the difficulty. The later levels are challenging enough that they become very addicting. The levels may a repeat the same theme over and over, but they remain refreshing with new mechanics every time you advance. There are also special events where you can earn special rewards for completing new levels before the event expires.

It's always good to have a go to match 3 title on your iOS devices. Another Freakin' Mobile Game doesn't redefine the genre, but it is a fine free alternative for when you're tired of Candy Crush. It does a good job of capturing the fun and racy humor of Family Guy while being challenging enough to keep you playing.

Another Freakin' Mobile Game is available for free on the Apple App Store.