Samsung, the maker of past iPhone processors, has revealed its latest ARM chip. Clocking at an outrageous 1 GHz, this chip only consumes 640mW of power. 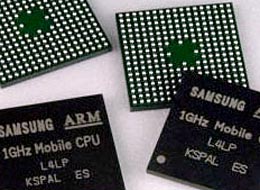 The Hummingbird is the first ARM-based processor design to be built by Samsung using a 45 nanometer assembly process. This keeps energy efficiency at a maximum and lowers the heat emissions of the chip. The Hummingbird only requires one volt of power to operate.

Questions remain as to whether or not these new chips will appear in future Apple devices. So far, Apple has used Samsung technology in the iPod Touch and iPhone, however the company may opt to use custom-designed processors.

Apple acquired P.A. Semi in April 2008, which has added to speculation that Apple may design its own custom chips for mobile devices.