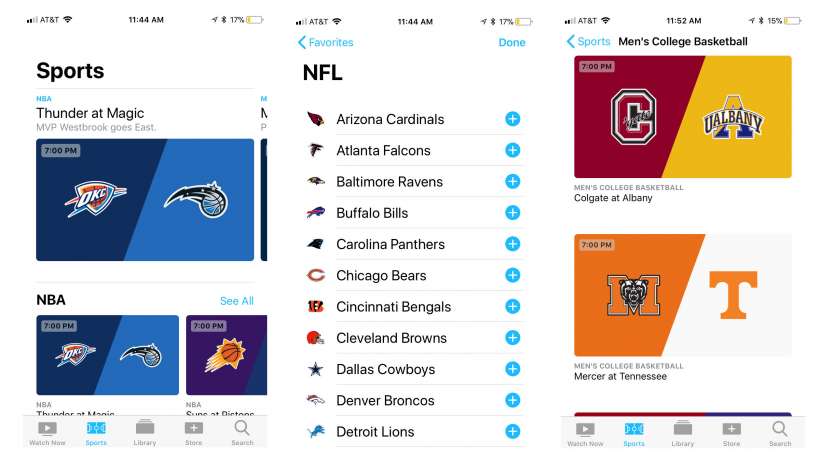 The Apple Sports section is now availble in the stock TV app on devices running iOS 11.2 or later. The new feature delivers live scores, game alerts and simultaneous viewing. You can access the new section by tapping the Sports tab inside the TV app on your iOS device. Once your cable/satellite provider is configured, you can then select your favorite teams from the MLB, NFL, NBA, NHL, and more.

Apple announced its live sports feature for the Apple TV 4K at its iPhone X event back in September. The Apple TV 4K will ship with a dedicated sports tab that will work along with compatible iOS devices. The iOS version of the new feature will send alerts before the beginning of selected team games, and notify you when close games are about to end so you can switch back-and-forth on your Apple TV. The Apple TV version will allow you to watch multiple games simultaneously on one screen, and see live scores and remaining game times across your display. The Sports tab will also be available on Apple TV devices running tvOS 11.2 or later.

The Sports tab is available today for iPhone and iPad owners running the latest betas of iOS and tvOS 11.2. Users who do not see the Sports tab should force quit and reopen the TV app on their device.

The Sports tab is expected to roll out for everyone sometime in December when the final versions of iOS and tvOS 11.2 are released. iOS 11.2 also includes Apple Pay Cash, AirPlay 2 and other new features and improvements.