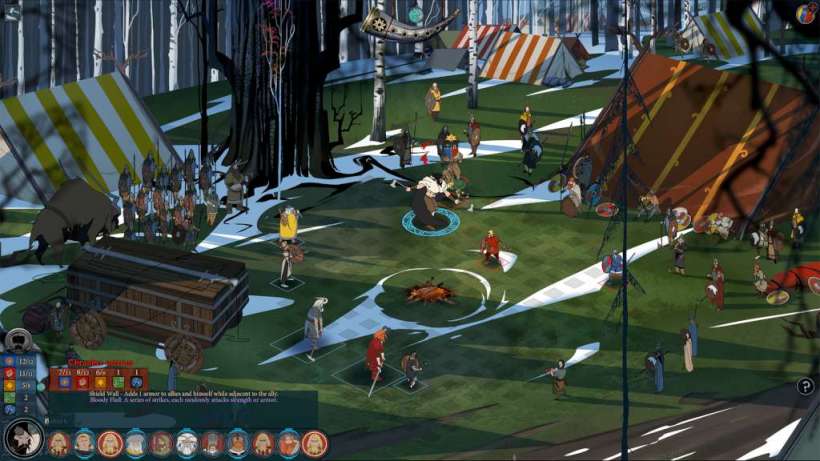 My PlayStation 4 has primarily been used as an expensive Netflix box since I bought it a few years ago. After being disappointed by my previous purchases, Friday the 13th and Fallout 4, just to name a few, I've been a bit gun shy with my money. It took someone giving me a couple of gift cards to give me the courage to try my luck with the PS4 Shop again, and I'm glad I finally did.

I saw Banner Saga included on a few best strategy game lists and decided to give it a go. It's a tactical RPG, and exactly what I was looking for. Banner Saga follows a group of humans, and an army of giant human-like creatures called Varl, who are both stuck on the run from an ancient race called the Dredge. A hunter named Rook is forced to lead a group of villagers away from the Dredge, while a Varl named Hakon is forced to reluctantly escort a Prince named Ludin to the city of humans. The game switches between both stories as players control both groups on their journeys.

Banner Saga offers a great mix of story telling and action. While there is a little bit too much reading in the first chapter, the game is part of a planned trilogy, it is offset by the hard decisions that you will have to make while on your journey.

Do you charge into battle, or flee and fight another day?

Do you save the villagers, or loot the market for supplies?

Your decisions really do affect the caravan and fighters following your lead, and it seems like you can never make the right call. The wrong decision can starve your caravan, or cause some fighters to leave and try their luck on surviving on their own.

What also makes the game intriguing is the resource management aspect. You need to watch your supplies as you shuffle from village to village looking for a safe place from the Dredge. The game will give you anxiety as you make a week long trek knowing you can do nothing as your supplies dwindle and your caravan slowly starves.

The battle system is pretty basic, but offers enough strategy to make it engaging. You control a changing roster of characters all with different strengths and abilities. You will need to learn how to use each character's strengths and abilities to fend off the Dredge, and other threats, such as bandits. You will also need to fight other humans and Varl for survival as the world literally crumbles around your feet. This is another part of the game that makes it interesting. You never know who is a threat or when you will need to use your sword or diplomacy to survive.

Banner Saga is not recommended for those who do not like text-based games or tactical RPGs. It is not for the first person shooter crowd, but it is a great game for those looking for a strategy title. Banner Saga 2 not only continues the story, but it also improves on the first adding more characters and battles to the story.

Luckily for iOS users both games are available on the Apple App Store for $9.99 each. Both games are worth the premium price tag, and highly recommended for RPG fans looking for a new w explore.