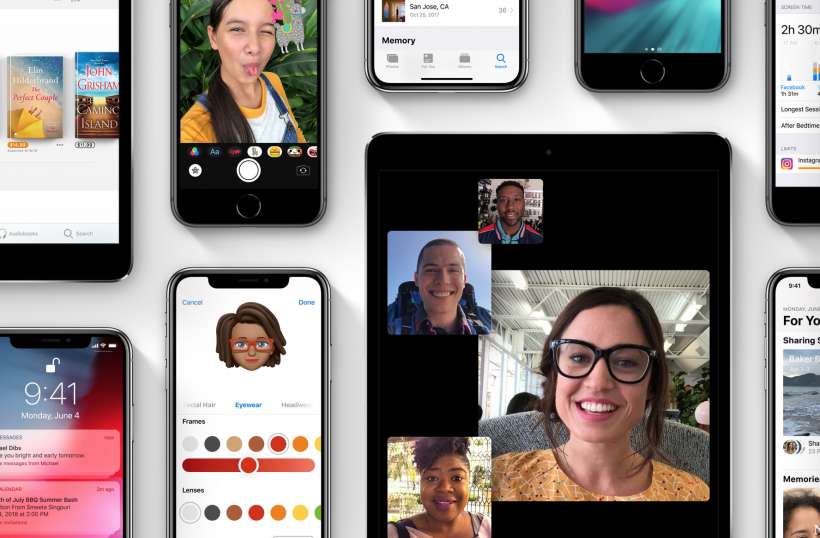 The Shortcuts app makes it possible to automatically run a sequence of events using third-party apps by giving Siri a single command. Siri will also suggest Shortcuts based on your daily routines. One example of a Shortcut would be telling Siri you're heading home. This could automatically send an iMessage to your spouse, change the thermostat and lighting at your home, and start playing your favorite podcast for the drive.

FaceTime calls can now be had with more than one person. In fact, Apple says FaceTime will support calls with a whopping 32 people on board. How to keep all of those faces from getting confused? Group FaceTime calls will automatically zoom into video of the person who's talking.

Messages and FaceTime get real-time effects, such as filters, animated text and stickers. Additional features are also included, such as quickly sharing Animoji photos and videos.

Screen Time will track and deliver analytics on device and app usage. Not only will iOS 12 users be able to see how many times they picked up their devices, but time limits can be set for specific apps, and bedtimes can be set up. This will help individuals and families keep track of how much their devices are being used, and see what apps dominate this time.

Apple will add the Measure app to help quickly and easily measure real-world objects with augmented reality (AR) directly on an iOS device screen. Not only this, but the update to ARKit makes it possible for two or more people in the same room to interact with the same virtual objects using different devices.

Notifications from various apps can now be managed directly from the Lock screen, providing better ways to reduce interruptions during the day. Notifications can also be grouped by type, and collected in the Notification Center for later perusal. Do Not Disturb can also be set for a meeting or event, and automatically turned on and off based on the time or location.

iPhone X owners can enjoy four new Animoji, as well as the ability to create their own personalized version of an Animoji, which Apple is calling a Memoji. Multiple Memoji can be created and used anywhere the Animoji can be used.

Many other enhancements will also come with iOS 12, such as more powerful tools in the Photos app and improved privacy from tracking in Safari. Developers already have iOS 12. Look for the public beta later this summer, ahead of the general release in September with new iPhones.