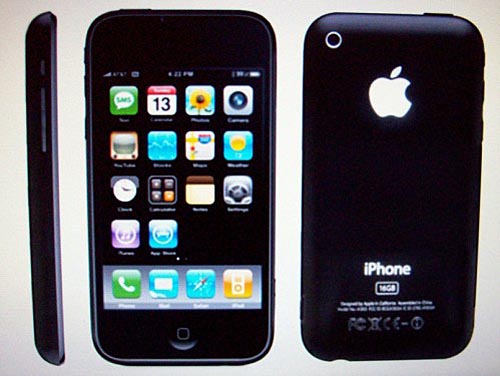 The second photo shows a redesign of the bezel in black, matching the China Ontrade parts supplier images we've previously seen, as well as a matte finish back with shiny lettering. The chrome ring around the iPhone camera is present, while in other photos of the matte iPhone back the silver ring was missing. Were the older pictures of unfinished prototypes?

More importantly, for the first time we are seeing photographic evidence that Apple may have moved the headphone jack to the bottom of the device. This would make dropping the iPhone in your pocket after using the device more intuitive when using headphones. There is also a new button on the lower right edge of the iPhone 3.0, next to the dock icons. 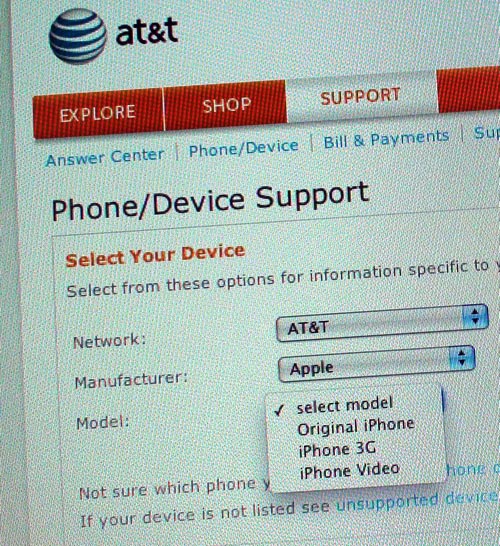 Last but not least, what is purported to be a leaked screenshot of an unpublished AT&T website calling the next generation iPhone the iPhone Video. This does look like the AT&T support website as it appears in Safari on Mac OS.

These images could be real, or they could be elaborate hoaxes. The truth is out there.

I totally believe in the new iPhone 3.0, but calling it the iPhone video? I sincerely hope that's not what it'll be called.

Who cares what its called??

Yeah Im thinking this is the real deal right here...

this isnt real, if it was it wouldnt be an sms app but the blank speech bubble and there would be the voice memo app. Though it's a good fake, it cant be real.

These photos... most of them have been altered using Photoshop. Anyone with as many years as I have using photo editing tools knows what to look for when spotting a mock-up. I guess we will all know in a few days... tic. tic. tic.

Ya i agree with u.ciw certification