According to reports, the PTCRB has tested and certified four new iPhone models for use on GSM operator networks. The four models have four different storage capacities, ranging from 4GB up to 32GB.

If the reports are true, Apple is likely differentiating the four models not only by changing the amount of flash memory. Previous leaks have indicated that Apple plans to offer modified software on each model to allow different levels of functionality based on the hardware and price of each device.

When iPhone 3.0 is released it looks like TV shows, movies and music videos will be available for purchase and viewing directly on the new device. Three mobile ads from Apple were found in the latest version of TwitterFon that linked to "iTunes Movie Rentals," "iTunes Movies" and "iTunes TV."

When touched, the ads led to a video area in Apple's mobile store that was under construction. Screenshots of the portal show various genres and featured items, however video content is not yet available. 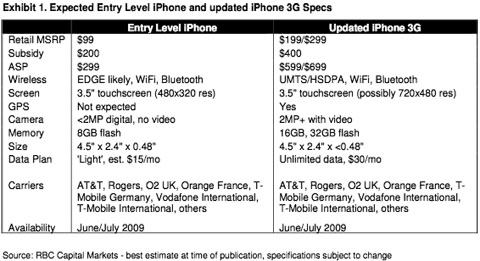