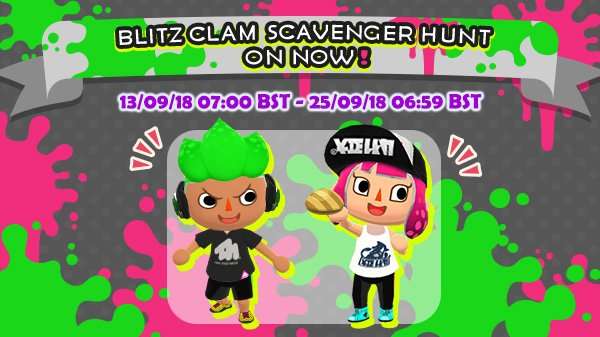 Starting this week, Animal Crossing: Pocket Camp players will be able to collect ten items by purchasing Inkling’s Splatted Cookies. Hopefully you have been collecting and saving a lot of Leaf Tickets during the downtime after the game's last event, Brewster’s Sweet Harvest. Inkling's cookies can be purchased for 50 Leaf Tickets, or 250 for a box. The cookies will be available until October 11th. Here's a list of items you can earn:

The official Animal Crossing UK account also announced that The Blitz Clam Scavenger Hunt is now running until Sept. 25th. Players will be able to search for a specific clam to earn items to craft Splatoon-themed clothing. Players will also be able to earn free items for checking their mailbox during the crossover. The items include a Squid Girl helmet available now, a Squid shirt that will be available September 19, and a Squid parka coming September 23.

Here are the items you can craft from The Blitz Clam Scavenger Hunt:

Animal Crossing: Pocket Camp is available for free on the Apple App Store.