Threatening to shoot your iPhone with a 9mm handgun in public could be funny. Immediately showing the Genius Bar employee the piece you have tucked into your belt -- not so much. 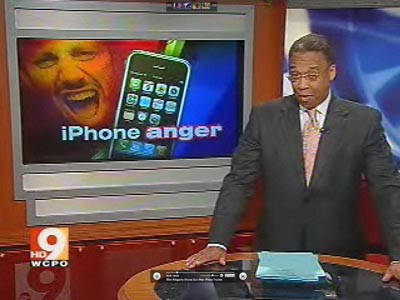 A man with a concealed firearm permit in Cincinnati, Ohio did just that. The police were not amused when they arrived and the man failed to tell them he was in possession of a handgun, legal or not.

The Apple employee kindly offered to fix the man's iPhone and told his manager to call the police. Apparently, someone pulling up their shirt to reveal a 9mm and yelling, "I'm so mad, I could pop a 9mm at it. I’ll do it right now!" will scare some people.

The perp was arrested and charged with "aggravated menacing, causing fear of harm." At least he didn't start shooting. We know the iPhone is capable of taking bullets, but he may have been in a little bit more trouble when he left the Apple store.

As long as Apple has an exclusive contract with AT&T, iPhone owners are bound to experience episodes of temporary insanity.