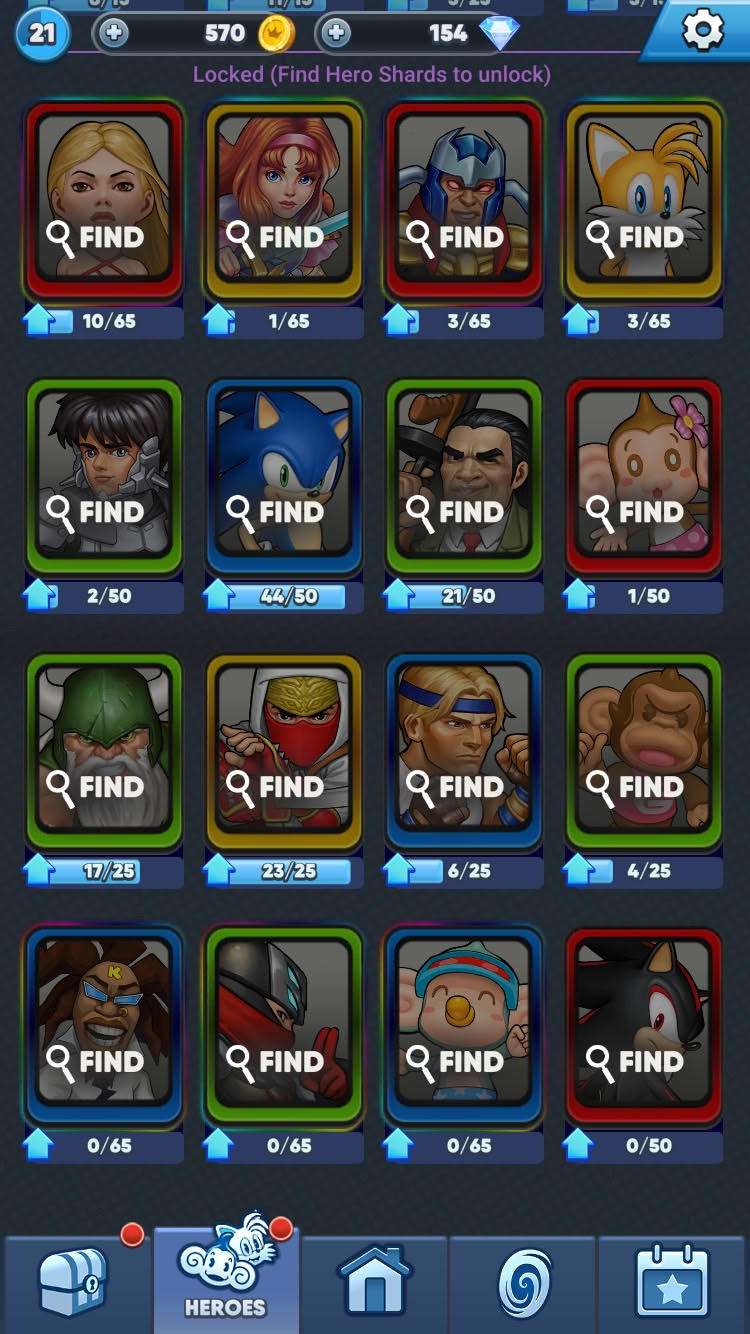 My initial review of SEGA Heroes wasn't very positive, but I have become totally addicted to the match 3 RPG. The game seems to be set up to frustrate you. It promises you the ability to unlock "legendary heroes from your favorite SEGA games," but this is almost impossible. To unlock a hero you must collect shards by completing battles, over and over. You need 25 to 50 shards to unlock most characters, and the only way to earn a shard is to complete specific battles. After each successful battle you are awarded gold, XP, gems and sometimes a hero shard.

Let's look at that again. You "sometimes" earn a shard, meaning you could potentially play the same level over 50 times to unlock one SEGA hero. There are other ways to earn shards. You can "loot" levels you completed with 3 stars, you can purchase shards with diamonds, and there are daily events.

Daily events are another source of frustration. These could be a great way to earn shards and trinkets that you need to increase your power moves, but a lot of times you won't meet the requirements to participate. For example, you'll need a specific hero or have to be a specific level to participate in an event. It's enough to pull your hair out, but instead I have found myself grinding away over and over. The game is set up so you'll eventually give in and purchase what you need. You can buy bundles of gems or hero packs and so on.

The freemium strategy is what makes SEGA Heroes so addictive. You'll eventually hit a wall that will frustrate you so much that you'll refuse to put the game down. This typically happens at the end each zone in the Campaign or Beyondering modes. The XP system is set up so perfectly that you always seem to get stuck at the end of each zone. You'll have almost enough power to defeat the final enemies, but it's never enough. This will force you to grind away at lower levels to try and earn enough XP and gold to advance your characters' stats. But then you'll use up all the energy you need to fight, and you'll need to spend gems to get more energy. It's a vicious freemium circle that will make you want to break out your wallet, or if you're crazy enough like me, to keep finding ways to grind. The next thing you know it's one in the morning and you're about to be evicted.

There always something to do in SEGA Heroes. There's a survival mode, daily events, and one of those fake online modes where you can compete to rank on a leader board. You of course have to unlock all this stuff, but when you do, the game can be a lot of fun. There's not only a strategy on how to battle, but there's a strategy to playing the game without spending money. It is also a lot of fun to see all the heroes and villains from old SEGA titles. Just don't expect to play as any of them and you'll enjoy the game much more.

SEGA Heroes is available for free on the Apple App Store.