The predictions that Apple would announce a multiple-carrier model for the US did not come true on Wednesday at the iPad special media event. In fact, Apple made a deal with the carrier to provide data services to iPads, and didn't mention any changes in the exclusive iPhone deal with AT&T.

For its part, AT&T has announced major improvements to the range, speed and strength of its 3G wireless network. The company currently provides service to twice as many smartphone customers as its nearest competitor.

The exclusive US carrier for Apple's iPhone has released an application devoted to reporting problems with their network. AT&T will even send a free SMS to confirm receipt of your feedback. 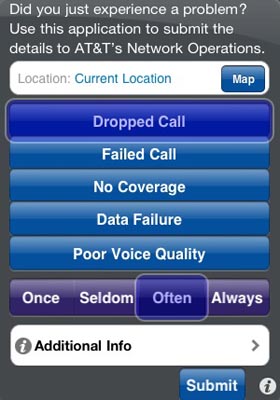 The exact latitude and longitude of the occurrence along with specifics of the problem are sent directly from the application. The main menu offers options including Dropped Call, Failed Call, No Coverage, Data Failure and Poor Voice Quality.

Eight second ping times? If you don't know what that means, just think "real slow." A normal ping time over the 3G network should be around 200 milliseconds (that's 40 times faster than eight seconds). 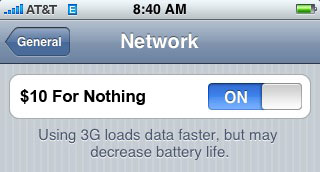 Why do some connections initiate right away while others take eight seconds or longer? Telecom blogger Brough Turner has researched the problem and explained that AT&T's network configuration could be to blame.

Only three short weeks until AT&T activates iPhone MMS on the 3G and 3GS. The company announced today that service would be made available via software update on September 25.

AT&T has been coping with an onslaught of data usage, and they expect the situation will get worse as soon as iPhone users start texting with pictures and videos. Wireless use on the AT&T network has grown 350 percent year-over-year for the past two years. The company released the following announcement:

Look out Verizon fans, the iPhone may be coming sooner than you think. AT&T must be nervous considering reports that the other wireless giant, Verizon Wireless, is currently in high-level talks with Apple about the iPhone. Vodafone, the co-owner of Verizon Wireless, already offers the iPhone in European markets.

It's possible that Apple is considering a CDMA version of the iPhone after all. Observers are predicting that if Verizon and Apple can strike a deal, the iPhone will hit Verizon shelves as early as 2010. AT&T has been trying to extent its exclusive arrangement with Apple beyond its expiration sometime next year into 2011.