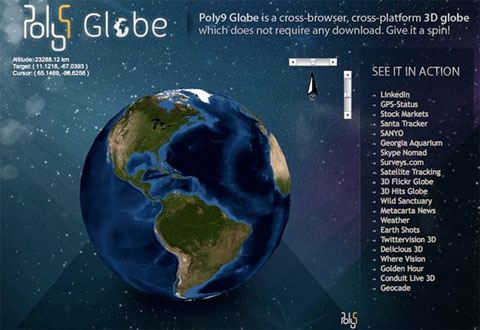 Not only this, but Apple has posted several new job announcements that ask specifically for software engineers with "experience developing navigation software." Four job postings for iOS software engineers are identical and contain the following:

Another posting also sounds like it could involve a cloud-based map server of some kind:

Apple is hiring a software engineer to manage and automate distributed image processing on a server cluster. The position is with an emerging and rapidly growing product team building software used by millions of Apple customers in rapidly growing markets worldwide.

This isn't a coincidence, considering that Apple recently opened a massive data center in North Carolina devoted to its services. The server farm is already five times the size of Apple's California facility and reports have indicated that Apple may still double this size with further construction.

Apple even has what they call a "Geo Team" that was referenced by Placebase founder and CEO Jaron Waldman. Of course, it's possible that Apple will only integrate specific mapping technologies from Placebase and Poly9 into the iPhone 5. Google recently announced a renewal of their search deal with Apple, however it's not known if Google Maps is included as part of the deal.

With the iPhone 5 expected to launch in summer 2011, it's possible that Apple needs more time to create its own navigation solution.

Just like the iPhone 4 and iPhone 3 free GPS Navigation apps?

(Does iphonefaq know ANYTHING about the iPhone during the past 3.5 years????)

Android will have Star Trek spoken technology decades ahead of the iphone. And we are now applying for something iphone will never have.

So if you want to play games buy an iphone, but if you want a useful device Android is the way to go, otherwise you will be dreaming and drooling for what Android does, case in point:

Iphone cumberly does and followed Android:

I phone can't do, though iphone fans drool for:

Just to quickly highlight which of the items on that list actually can be done on an iPhone:

Regarding the Screen
Superamoled screens are notoriously difficult to see in daylight. Yes they do look better than the iPhone screen so long as you're in a darkened room, however the rest of the time they're distinctively harder to see, and they just can't match the iPhone 4's resolution.
Also regarding 3D screens, I hope you realise that's the current controversy with the Nintendo 3DS - apparently it causes rather a lot of damage to one's eyes.

So my point is that both platforms are excellent, and the features you highlighted as "lacking" from the iPhone are actually readily available for the most part. However with the recent discovery of the Geinimi trojan for Android, it's clear that there's a few security holes that need to be fixed!

The iPhone *DEFINITELY* speaks directions. I use mine all the time. You just need to install any 1 of several free GPS apps.

You don't know much about the iphone. None of this is "new".

I love this phone very much. the design ,looking, feeling much very great! As a electronics sourcing guy for many years in shenzhen. i have noticed this transparent keyboard phone for many years. 2 years ago,i have saw one factory pushed one phone with transparent keyboards with led light. Chinavasion also at the first time to sell it . To the surprise, the phone quality is also good. Amazing!

Good day I am so glad I found your blog, I really found you by mistake, while I was researching on Aol
for something else, Nonetheless I am here now and would just like to say
many thanks for a fantastic post and a all round entertaining blog
(I also love the theme/design), I don’t have time to browse
it all at the minute but I have book-marked it and also included
your RSS feeds, so when I have time I will be back to read
more, Please do keep up the excellent work.