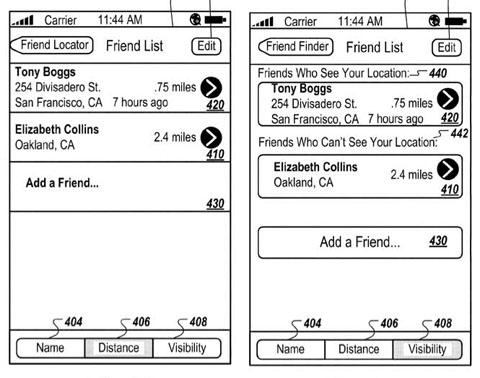 Location services can be set to automatically update the service or use only manual updates similar to a Foursquare check in. Apple is competing directly against Google's Latitude service, which finally launched in the App Store last week. Apple had said it was evaluating the app and they were concerned it could confuse users of the built-in Maps application. Google Latitude boasts nine million active users.

When it comes to location services and GPS, speculation has centered on Apple's recent acquisitions of mapping companies Placebase and Poly9. Recent reports have indicated that Apple might offer a native navigation app that would speak directions to iPhone owners for free. With this patent on the books, it seems that the Apple Geo Team has its hands full developing a variety of new built-in features for a future iOS devices.

The iPhone 5 is expected to ship in summer 2011. Apple could include Friend Locator and voice navigation applications on the next generation device, however the company normally keeps tight-lipped until several months before a new product is available. Stay tuned for updates on new location services coming to future iOS releases.