For those who remember the good old days of video gaming on the Atari 2600, the most comprehensive retro gaming collecting to hit the App Store is finally here. Atari offers 100 games in total, some which emulate arcade versions of these classics, and others just like the cartridges for Atari's home Video Computer System (VCS). The app, Atari's Greatest Hits, comes with the 1972 arcade version of PONG, with other games available for in-app purchase. 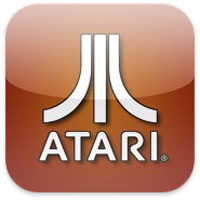 Different packs of four games organized into categories run $0.99 each, but the entire collection of 99 additional games can be had for just $14.99. Downloading the complete collection requires Wi-Fi as the file is 68 megabytes. One modern feature to be added to select games is Bluetooth multi-player functionality so you can compete against others who also have a mobile device running iOS 3.0 or later.

Each game has settings and options, and of course with the 2600 VCS titles you can flip those big metal switches right on your touch screen. Game galleries are interesting and include photos of cabinets, copies of game manuals and other historical information to round out the experience. The games play well although many have complained about the touch screen controls. Let's face it, there's nothing quite like an Atari joystick. They're built like tanks and they handle like one, too. You'll never simulate that kind of controller on a touch screen no matter how hard you try.

With titles like Asteroids, Battlezone, Warlords, Centipede, MIssile Command, Breakout, Tempest, Night Driver and Adventure to name a few, Atari's Greatest Hits is truly a trip down memory lane. Even gamers new to these historical titles will enjoy the glimpse into the past these game packs bring to the Apple iPhone. Of course, if you're lucky enough to have an iPad, the larger screen is even better.

Atari's Greatest Hits is expected to support the iCADE retro gaming cabinet for iPad coming from ThinkGeek this June. Combining these iOS ports of classic arcade titles with a real joystick-equipped mini-arcade cabinet will capture the attention of retro gamers everywhere. Too bad the iPhone is so small, otherwise it could use its own version of the iCADE for better gameplay.

Wow this is pretty cool, I'll have to look into this for my sites. The retro games should really appeal to those of us from the 80s when games where really getting popular. Anyone younger probably won't appreciate them.
www.blizzgamers.net
www.virgolamobile.net