Is the iPhone 5 Becoming the New Bigfoot? Spotted in San Francisco!

I fear for people's sanity if Apple doesn't make an announcement about the iPhone 5 soon! Things have gotten so bad that we've been reduced to posting dodgy pictures of people holding iPhones. What's next? Pictures of Elvis with an iPhone from the future?

9to5Mac posted a picture taken by a person who claims he saw an iPhone 5 prototype on a train in San Francisco. His credentials are listed as owning an iPhone 3GS and iPhone 4, which according to 9to5 makes him an Apple expert. The tipster told the tech blog that the next-generation iPhone is "almost EVO-like," and that the edges of the device looked like the edges of the Samsung Galaxy Tab 10.1. So he's not only an Apple connoisseur, but he also knows a lot about Android devices too. 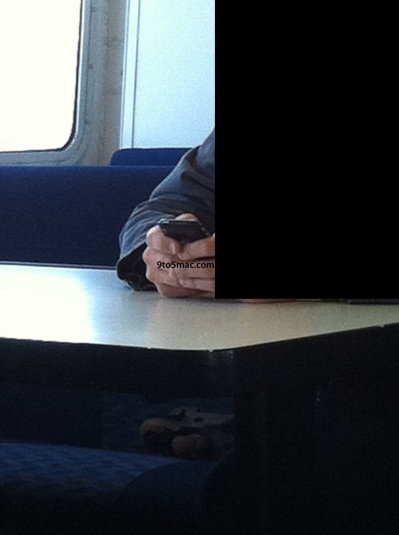 I'm guessing the picture was snapped on an Amtrak train, because I do not recall Muni or BART trains having tables. However, I must admit I'm not an expert when it comes to San Francisco's transit system, and I haven't been there in years. Let me know if tables on trains do exist in the city somewhere. It will help us get to the bottom of this.

The only credence I can offer to this story is that, West Coast Gadgets did report that Sprint beta testers were going to be testing iPhone 5 prototypes in Los Angeles, San Francisco, Dallas, New York City, and Chicago starting on July 18th. Maybe this is a picture of a Sprint employee testing his new iPhone 5 prototype... "Can you hear me now?"

Even if if 9to5 is right, and this is an early iPhone 5 model, it doesn't do any of us any good. But I appreciate the effort! And what is that weird thing sitting on the seat next to him?

It looks like the Bay Area's Caltrain, which goes between SF and Silicon Valley.

Thanks, that makes sense!