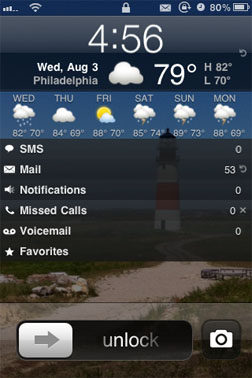 Open Cydia and navigate to Sections -> Tweaks -> LockInfo or find the package using Search. Tap the Install button and Confirm. Once the tweak is installed your device will display the dialog box pictured below. Touch the Settings button to configure LockInfo. 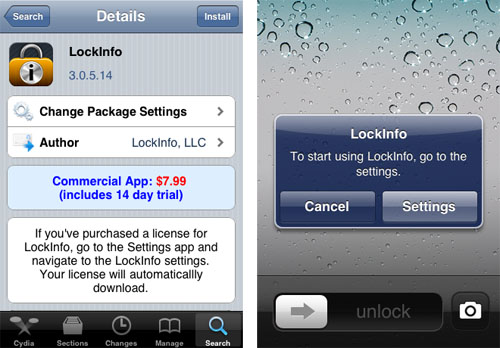 When you select Settings -> LockInfo from your device home screen during the free trial, you will be asked if you'd like to Buy Now or Continue Trial. Tap Continue Trial to enter the settings. Besides just displaying your current information on the lock screen, LockInfo can be displayed from the home screen just like iOS 5 Notification Center.

This function is called Infoshade and the feature is turned on by default. Swiping down from the task bar or tapping and holding on the task bar will bring up LockInfo. To change the gestures that bring up the Infoshade choose Settings -> LockInfo -> InfoShade -> Activation. You can even tell LockInfo to display different plugins or themes on the device lock screen vs. the InfoShade. 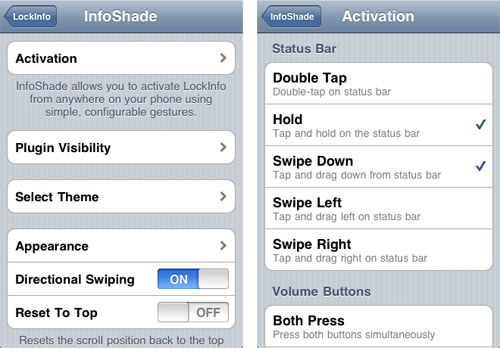 Settings -> LockInfo -> Homescreen -> Enabled -> ON will make the LockInfo screen your default home page. To see app icons swipe left. This feature is off by default.

To further improve the functions and usefulness of LockInfo a variety of plugins and themes are available for the tweak. For current weather and forecast information to appear as in the first screen capture install and configure the Lock Weather Plugin. Incidentally, if you're wondering about the camera button next to the unlock slider you can install CameraLock.

Another key feature of LockInfo is the ability to instantly reply to text messages when they appear. To make this functionality possible install and configure QuickReply SMS. Once LockInfo is installed your iOS device will be like new and you'll forget you were even waiting for the iOS 5 Notification Center.