Google Plus App Redesigned for the iPhone

Google announced their redesigned app for the iPhone on Wednesday via their official blog. Version 2.0.0.5888 of the Google+ brings a new stream and navigation experience, plus various bugfixes and performance improvements. 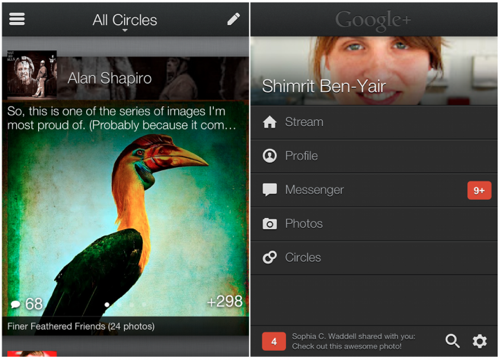 Full-bleed photos and videos are cool. But you know what’s really cool? Content so immersive it remakes your mobile device into a rich carousel of beloved memories and breaking news. That’s the Google+ experience we aspire to, and today’s release helps us get closer:

Whether you post photos or articles or text, we’re making ‘em look gooood
We’re adding crisper fonts, larger profile pics and a friendlier homescreen
We’re making the stream easier to scan, and easier on the eyes with overlays, gradients and other visual elements.

It might seem odd that Google updated the iOS app before the Android app, but the iOS version was so poorly received that Google had to do something to improve it. An Android update will be available in a few weeks with "a few extra surprises."

If you do not already have the Google+ app you can download it from the App Store for free. It's compatible with the iPhone, iPod touch, and iPad, and requires iOS 4.3 or later.