These may not be the first iPhone 5 mockups to appear, but they are some of the best. Not only this, but the photo and video below are based on leaked parts and other information from sources across Apple's supply chain and beyond. The images come to us thanks to Bryce Haymond at Blackpool Creative. 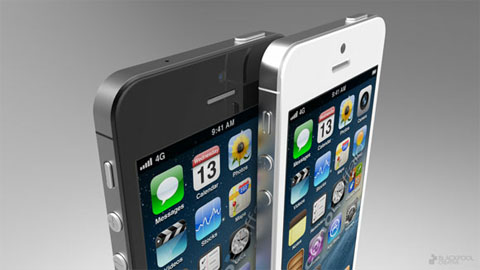 The devices have been slimmed down from the iPhone 4S profile, and the front-facing camera has been moved to the center of the earpiece. The display has been extended to a 16:9 ratio, with space for an additional row of icons on the home screen.

The back is a combination of glass and aluminum, and a metal bezel surrounds the device. Overall, the renderings do a great job of summarizing various parts leaks and diagrams that have surfaced. Check out the video below.

Haymond mentions a few discrepancies that have appeared since he created the renderings on his blog:

There also appears to be plastic rings around the headphone jack and dock port at the bottom of the phone, which I did not include in my model. The SIM slot also appears to be less wide than I show. It’s also unclear yet as to whether the buttons on the black iPhone will be the same black anodized color, or remain silver. I kept them silver. I haven’t seen any buttons leak yet.

Regardless, we are impressed. Apple is unlikely to reveal the next iPhone at WWDC next week, however several improvements to iOS 6 are expected. A good deal of information about the internals on the next generation iPhone hardware has also been reported. October will mark one year since the iPhone 4S launch.