Once a new Apple product hits the market, it doesn't take long for someone to disassemble the unit to see what makes it tick. In classic fashion, iFixit did just that to the EarPods, even though they are not designed to be opened or repaired. Despite this drawback, there are several design improvements beyond just acoustics. 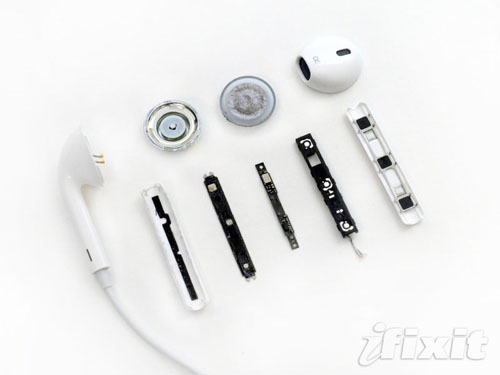 The EarPods are the first Apple earbud headphones to utilize paper cones in the speaker diaphragms as opposed to all plastic. Not only should this improve frequency response, but it results in a more durable speaker that will better resist tearing. Other durability improvements were also spotted in the teardown.

The remote control still contains two buttons and a microphone, however the unit is better sealed from moisture. Apple also added strain relief wrap to the top and bottom of the remote to reduce wear and tear on the cable. Interestingly, iFixit explains that there's no microphone opening on the remote. Apparently this opening is not actually needed, because the grate on the previous remote was fake.

Apple made a big deal about the redesigned speaker housing fitting better inside the ear and staying put. Besides ditching a circular design, the EarPods also lack grey rubber around the outside of the housing. This should also improve durability as the rubber coating tends to wear off over time. iFixit did not feature the audio plug in their teardown, so we're guessing there was no change there.

EarPods will ship in their own carrying case along with the iPhone 5, iPod touch 5G and iPod nano 7G. If you're interested in buying a pair separately, Apple is selling them for $29.