How to Fix the iOS 6 evasi0n Weather App Bug [Jailbreak]

There is now a simple fix for the Weather app bug being caused by the new jailbreak tool evasi0n. Jailbreakers can grab the official patch under the “Changes” section of Cydia. If you do not see the UIKit Tools package under Changes, just try refreshing the page, and it should appear. 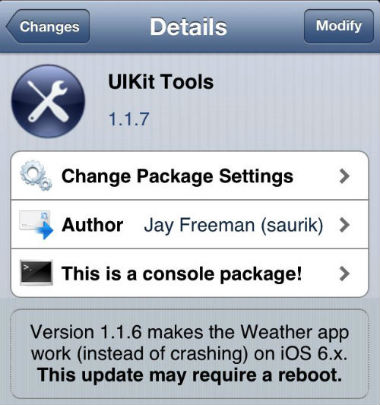 While evasi0n was a success with over 100,000 downloads in the first 10 minutes of its release on February 4th, it also crashed Apple’s stock Weather app on the iPhone. Thankfully the evad3rs, who released the jailbreak, quickly identified the problem and fixed it.

Evasi0n works with any Apple device capable of running iOS 6 or iOS 6.1, except the third-gen Apple TV. This includes the iPhone 5, the new iPad and the iPad mini. The jailbreak tool is currently available to download for free from the official evasi0n website. As always, remember to backup your iOS device using iTunes or iCloud, and read all the directions before jailbreaking your device.