lubbaa, A New iPhone App That Lets You Track The Biorhythms Of Your Mate

I've been single for two years and every sloppy attempt I've made to change this sad fact has been just that: sloppy. Maybe what's been missing all along is these biorhythms lubbaa is telling me about, and if I started every conversation I had with appealing men at bars with, "What's your birth date? Give me a second," instead of "Hey papi, want a taste?" I'd be getting somewhere. 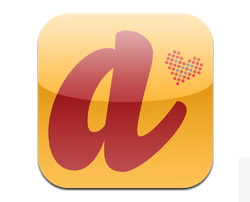 The intriguing logo of lubbaa, a chubby, curvy lowercase "a" punctuated by a speckled heart, is quickly belied by the app's look once it is opened. Some sort of natural fall theme in browns and yellows composed of stock photos of nature decorate lubbaa's innards. It could be made to look alright if not for the goofy font, possibly chosen to mimic a relaxed handwriting. Maybe it's supposed to be like the journal of a 14 year-old girl going through a Wiccan phase; she's calculating the biorhythms of all the cute boys in her high school to see if they might be fit to be brought home to daddy. "But, Daddy!" she'll cry, as he stares disdainfully at Trent's arm sleeve of tattoos and lip piercing. "Our sensitivity and emotional biorhythms sync perfectly!"

As you enter the birthdays of yourself and your mate, the lubbaa app makes a horrible creaking sound, like doors being opened in a haunted house, or maybe a swarm of croaking hell frogs. If you don't turn back from terror, hit the start button and the next page will pop up. Different colored bars fill, demonstrating your Physical, Emotional, Intellectual, and Sensitivity compatibility percentage, with the average percentage of all four given at the bottom.

If you click on each bar, it gives you a more detailed explanation as to what each quality entails. I especially like that the logo used to represent the overall average is the logo from that movie Suspect Zero, which is really just an O with a line through it. But I would be pretty into a serial killer that chose their victims using biorhythms mapped on lubbaa. The lubbaa murderubbaa.

I started to get more into the app as I was getting responses from my friends after requesting their birthdays. My friend Steven and I were found to be 100% intellectually compatible, which is great as we're working on plenty of artistic projects together. My mother and I were 13% physically compatible, which was even better, as she's my mom. My roommate and I are only 26% compatible overall, bringing us into Odd Couple territory. 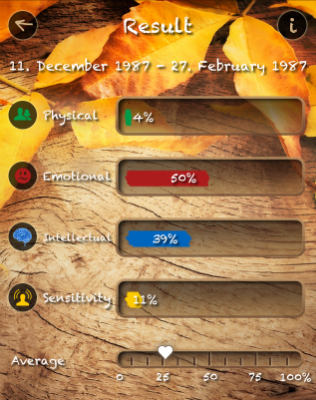 My roommate then proceeded to check herself to herself, to discover that she and herself were 100% compatible!

Even if none of it meant anything, it was pretty fun. Everyone who asked what I needed their birthday for was eager to see what lubbaa spit back out, and even if it didn't seem accurate, we got a great laugh from it. I know full well we will have more fun with it the next time we are drunk at a bar.

My biggest suggestion for this app would be to give you the option to view your highest average matched days, maybe within a year. Or if there is a 100% match on any day at all ever, I'd like to know. I'd make a craigslist ad to find him or something. As long as he isn't eighty years old. If he is, I'll settle for a 99% biorhythm match.

I think the absolute best part of the lubbaa app is the sound that plays when you click the info button on the top right corner. I assume it's one of the developers singing a lubbaa theme song. I've listened to it about 40 times. I wonder if his biorhythms match mine.

lubbaa is available for $0.99 in the iTunes store.

Thank you very much for that great article about lubbaa! I love it!

By the way: The artist name of the man, who gave lubbaa its voice is "Nick Lexington" :) - and you are right...it's me, one of the developers;)