There's been a lot of talk recently about how this year's Consumer Electronics Show (CES) yielded little to be excited about. For the most part, the iPhone field at CES didn't effort to depart from this norm. However, there were a couple iPhone related tidbits worth talking about. One of which was Delphi's experimental iPhone software which allowed an iPhone to control a car. And yes, that's not a typo, it's not the car controlling the iPhone - the iPhone is controlling the car. 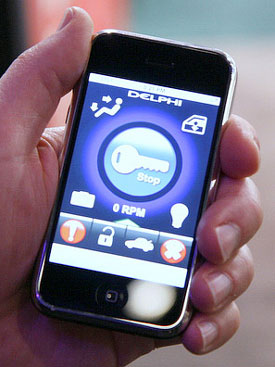 The software communicates with the car via Bluetooth and can be used, impressively, from up to a mile away. Though purely a proof-of-concept at this stage, the software already offers an exciting feature set.

, oil, and brake fluid. The software can also perform tasks that are destined for more frequent use such as opening and closing windows, manipulating the climate control, and starting the ignition. Can you imagine looking out your office window (or not looking) on a hot summer day and grabbing your iPhone to start up your car and turn on the A/C before venturing out into the heat?

It doesn't end there. The Delphi software, called Wireless Vehicle Access, can also interact with the car's alarm system to see if the security of the car has been compromised and can even check to see if the car is occupied.

Wireless Vehicle Access can also be installed on other smartphones or even a key fob.