Google Translate received a major update, to version 3.1.0 with several new features. The iOS app continues to improve, with Word Lens integration for live text translation. Aiming the iPhone camera at printed text, such as a sign or restaurant menu will reveal an instant translation via augmented reality. 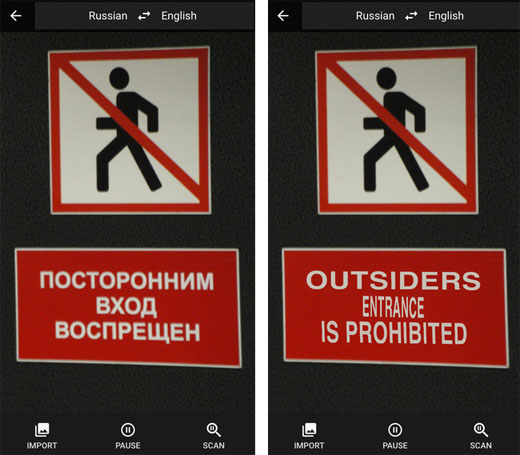 This feature translates French, German, Italian, Portuguese, Russian and Spanish into English and vice versa for starters. Google plans to add more languages to Word Lens soon. In the meantime, 36 languages can be translated using a still photo of text. Once the text is captured, words or sentences can be highlighted for translation.

More details from the Google Blog highlight new conversation translation tools in the update as well. Now the Translate app can automatically translate in real-time while the conversation is happening. It will even recognize which language is being spoken on the fly, once the process is initiated.

Google notes that over 500 million people use Google Translate every month, making over one billion translations per day. The app supports 90 languages in total, with options to enter text using the keyboard or via handwriting directly on the iPhone display. Completed translations can even be favorited for quick offline access.

Google Translate is available free on iTunes. The app requires iOS 7.0 or later, and has been optimized for the iPhone 6 and iPhone 6 Plus.