There's a new breed of Plastics trying to takeover North Shore by piecing together the Spring Fling Tiara, and it's your job to rally all the high school cliques to stop them. Welcome to Mean Girls: The Game, brought to you by the same developers who gave us RuPaul’s Drag Race: Dragopolis. 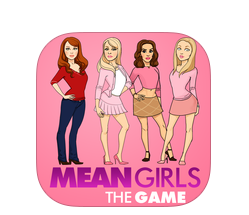 Mean Girls for iOS is a tower defense title. If you have never played a TD game before, the basic goal is to stop waves of enemies from crossing a game board and getting to the final goal. You normally do this by placing towers along a path to blow up advancing armies, but in this game your job is to stop teenage girls by hitting them over the head with guitars and launching baseballs at them. Some people find tower defense games boring because you don't really control anything on the screen. You just just kind of sit around and watch your towers do all the work. The good thing about this game is it keeps you busy with trivia, and you really need to know a lot about Mean Girls the movie to do well. 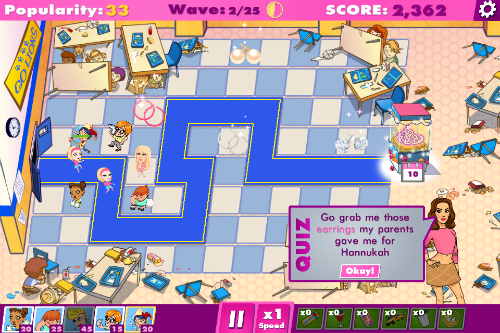 First let me say Mean Girls: The Game isn't going to win any design awards (It looks a lot like Fashion Wars on Facebook), but it does offer a lot of playing time with 5 different levels through four different worlds. It also has three modes of difficulty for each level, plus different challenges and achievements, giving it a high replay value. As for Mean Girls nostalgia, the game features all the best characters, quotes and everything a die hard fan could ask for. This game really knocks it out of the park with Mean Girl references. For example, you can earn special pink treats for playing on Wednesdays and it features power ups such as peppermint foot cream. 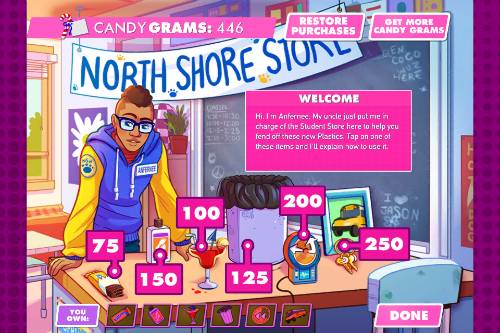 The gameplay is simple and easy to learn. You start off by selecting five cliques to defend the tiara. You then spend points, in this case Popularity, to strategically place the cliques on the game board to create your defense. You also get to choose one friend to help boost your army of nerds, jocks and other high school stereotypes. For example, Regina George makes any nearby cliques stronger and Gretchen Wieners makes them faster. What makes Mean Girls unique is that you have to answer trivia questions to use your friend's special abilities. This gives you more to do than just sitting around waiting to gain Popularity so you can place more towers.

While Mean Girls is basically a run-of-the-mill tower defense title, fans of the movie will enjoy all the inside jokes and trivia aspect of the game. Mean Girls: The Game also offers more entertainment value than most movie tie-ins released to the App Store these days.

Mean Girls: The Game is available on the App Store for $3.99. There are in-app purchases for in-game currency (Candy Grams!) but you do not need to spend additional money to enjoy the game.