DockWare was originally developed for jailbroken devices running iOS 7. The tweak has been updated for iOS 8 compatibility, bringing many new features to the stock iOS 8 dock. Once installed, DockWare 2 can be configured with a long list of options in the Settings. There are three main sections which control home screen behavior, in-app behavior, and the activation method for showing or hiding the dock. 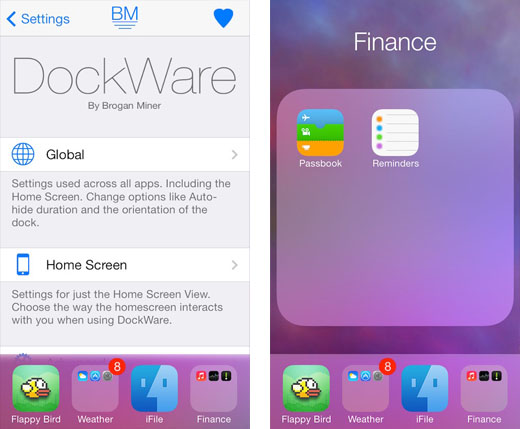 Folders can be placed in the dock like app icons, and the dock itself can be shown anywhere, including when using an app. Besides an activator gesture to control the dock, the dock can be hidden entirely on the home screen with a toggle. Other options include an auto hide feature with a timer, and eight custom animations for the showing and dismissal of the dock. 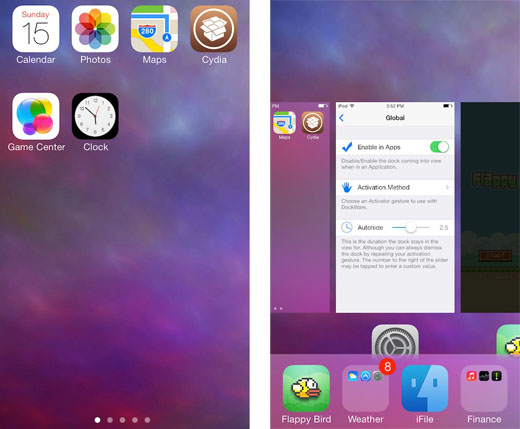 Inverse mode only shows the dock, and hides all of the home screen icons. To prevent the dock from ever being displayed in particular apps, these apps can be toggled under Black List in the settings. DockWare is a streamlined tweak, with smooth animations which can Squeeze, Push or Overlay the open app interface or home screen when the dock is shown.

DockWare (iOS 8) is available from the BigBoss repo on Cydia for $0.99. To start customizing iOS, click here for instructions on jailbreaking iOS 8.0-8.1.2. Those with older firmware can jailbreak with Pangu (iOS 7.1) or evasi0n 7 (iOS 7.0). Find out how to purchase and install Cydia tweaks with this guide.

This is a very good service