Opening the Control Center or Notification Center from the iOS lock screen is convenient. It can also be viewed as a security risk for those who like their devices locked down. The jailbreak tweak Secret-Lock adds an additional layer of security to prevent unauthorized access to all lock screen features on the iPhone. 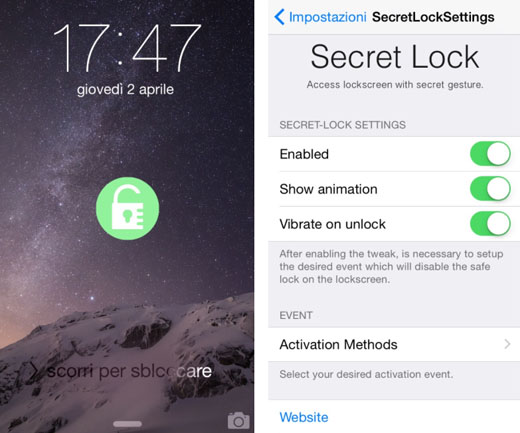 Once installed, Secret-Lock can be toggled in the settings. There are some options to be configured, including the secret Activator gesture that will unlock the lock screen. Everything on the lock screen will be inaccessible until this gesture is performed.

Performing the secret gesture opens up the lock screen to normal behavior, such as taking photos or accessing Notification Center. The tweak is also capable of showing an animation when unlocking, or vibrating the device. For anyone looking to add an extra layer of security to the iOS lock screen, Secret-Lock does the job.

Secret-Lock is available from the BigBoss repo on Cydia for free. To start customizing iOS, click here for instructions on jailbreaking iOS 8.0-8.1.2. Those with older firmware can jailbreak with Pangu (iOS 7.1) or evasi0n 7 (iOS 7.0). Find out how to purchase and install Cydia tweaks with this guide.