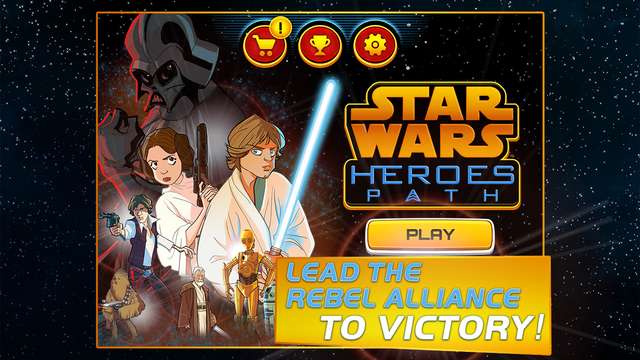 Disney has released another Star Wars mobile game for iOS devices. Star Wars - Heroes Path is a stealth/puzzle title that is being compared to Hitman Go. The game takes place during A New Hope and allows players to play as Luke Skywalker, Han Solo, Princess Leia, Chewbacca, and Obi-Wan Kenobi. The basic idea of the game is to sneak your character past Stormtroopers without being seen.

There are multiple levels on 6 environments starting with Tatooine. Players can work their way through other familiar Star Wars locations until they reach the Death Star, but only the first 6 chapters are available for the initial $3.99 download fee. Four additional chapters plus some environments are only available as in-app purchases.

The game features multiple solutions for each level, the ability to unlock new heroes and special abilities, plus daily challenges. Users can also summon R2-D2 to hack gates, use decoy holograms, and of course deploy lightsabers and blasters.

Star Wars - Heroes Path is available now on the App Store. It supports all devices running iOS 7.0 or later. Here's a gameplay video posted to YouTube this morning:

I just tried it tho morning and the production value is off the charts! They spared no expense immersing players into SW and the gameplay is tight as well if you like Puzzle games. Overall eel done, worth checking out.