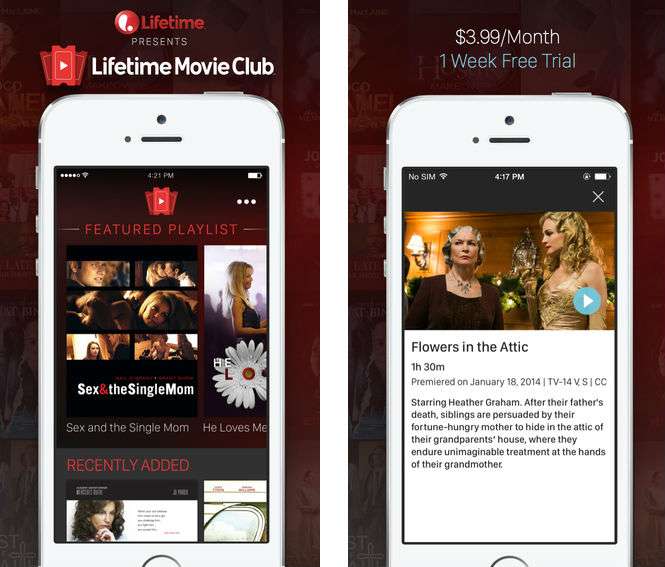 Lifetime has always been known for its over-the-top made for TV movies, but recently the basic cable channel has been hitting a lot of home runs. Not only is Lifetime giving the king of B-movies, the Syfy network, a run for its money by releasing internet fodder such as The Choking Game, but it has also found ratings success with its adaptations of V.C. Andrews' Flowers in the Attic novels. The network also got the internet talking thanks to its controversial biopic Aaliyah: The Princess of R&B, and by nabbing big name talent such as Will Ferrell, Kristen Wiig and Bella Thorne.

Lifetime has decided to strike the iron while it is still hot by releasing its own movie streaming service. The Lifetime Movie Club app allows users to watch Lifetime movies on their iPhone, iPad and iPod touch for only $3.99 a month (w/ 7-day free trial). There are no commercials and your monthly payment is deducted directly from your iTunes account. There are a few downsides to the service. For example, newer titles like Perfect High are not currently not available, and there is no search option. The App Store description does promise that new movies will be "added regularly" so it may just take a while for newer titles to land on the app.

Movies currently available through the app include A Girl Like Me: The Gwen Araujo Story, Flowers in the Attic, Imaginary Friend and Confessions of an American Bride.

Now you have zero excuses not to cut the cord. You can subscribe to the Lifetime Movie Club, Netflix, HBO Now, Hulu Plus, Amazon Prime, and still pay less than you do for a cable or satellite subscription.

The Lifetime Movie Club app is available for free on the App Store. It supports all devices running iOS 7.1 or later.