iOS 9 still not downloading for some users 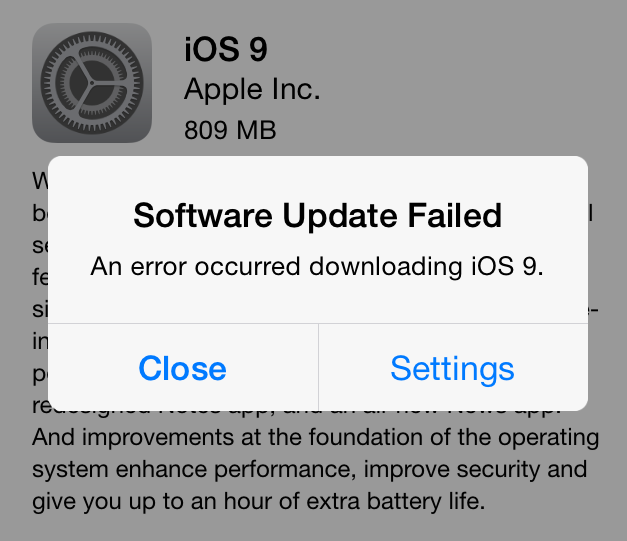 Apple officially released iOS 9 on Wednesday, September 16. The update promises to make your iPhone "more intelligent and proactive" and add new multitasking features to the iPad, according to the release notes. Unfortunately some have not been able to download the new firmware and are instead receiving an error message that reads, "Software Update Failed."

So many iPhone and iPad owners have taken to Twitter to complain about the update failure that iOS 9 is trending for all the wrong reasons. Apple eventually added an "Update Requested..." message to let users know that the download error is not a bug, and users may have to wait a little longer while millions of people try to download iOS 9 at the same time. However, this morning the problem is still occurring and I have not been able to update my device.

After a few tries I was finally able to avoid the error message, but after verifying the update my device rebooted and I'm still stuck running v.8.4.1. The only solution to the problem seems to be keep trying or just wait until demand has slowed down.

“We have discovered a bug in development of watchOS 2 that is taking a bit longer to fix than we expected,” an Apple spokesperson told TechCrunch. “We will not release watchOS 2 today but will shortly.”