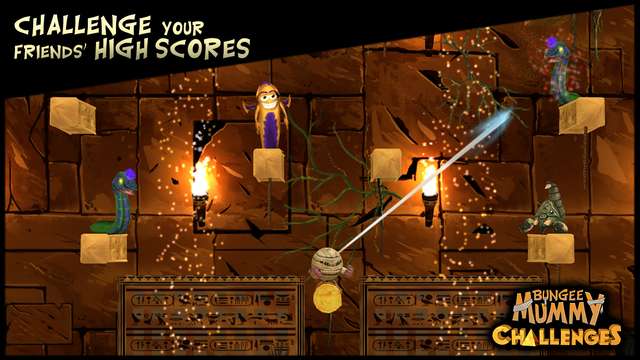 Bungee Mummy: Challenges is the second game in Steampunk Wizards' Mummy series. The first title, Bungee Mummy: King's Escape is a lot like last year's Halloween App of the Week, Skullduggery. The goal of the game is to use your bandages to swing around ancient tombs like Spider-Man and defeat the evil Solark who has stolen your throne. Bungee Mummy: Challenges is a bit different in that it consists of four mini games instead of individual levels for you to complete.

The goal of Challenges is to save the helpless Geemies by bungee blasting cages to help them escape, smashing snakes, delivering them supplies and by collecting scarabs while trying to survive the Wheel of Misfortune. Steampunk Wizards says each mini game has its "own unique charm and style" that require different skills to complete. This gives everyone a chance to compete on the leaderboards to become the "king of each challenge".

Both Bungee Mummy: King's Escape and Challenges are free on the App Store. King's Escape does feature in-app purchases but they're not necessary to enjoy the game. Challenges supports all devices running iOS 7.1 or later, but it kept crashing when I tried to test it on the iPhone 4s. King's Escape did work on older devices, but it was a bit choppy. Here's the launch trailer: