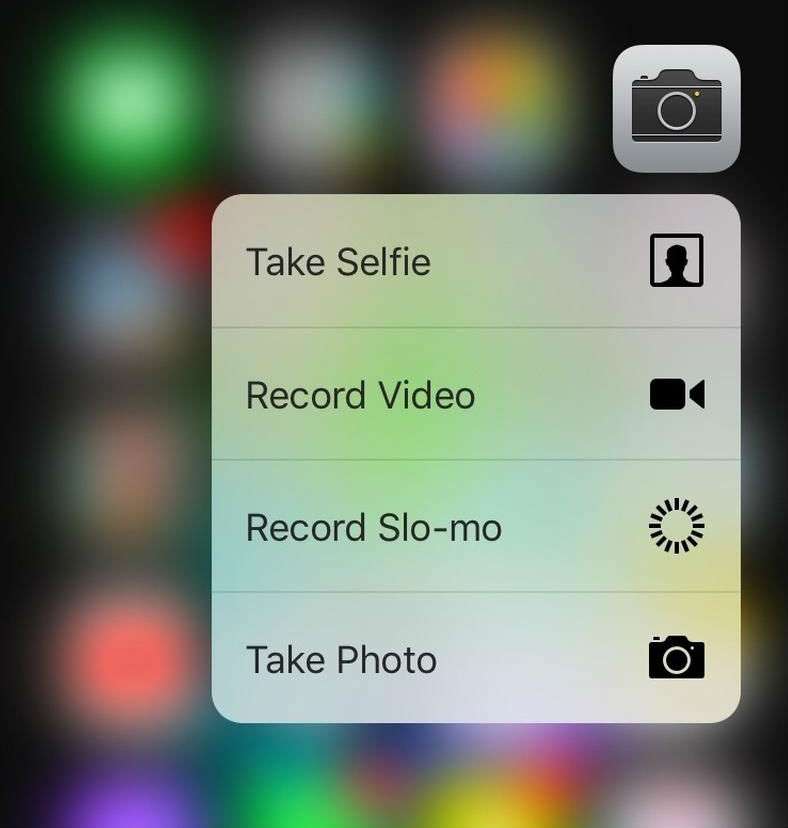 Most stock and popular third-party apps on the iPhone 6s and 6s Plus now feature quick action menus that allow you to to perform tasks directly from the Home screen. Quick Actions are little shortcuts users can access by performing a long or hard touch on app icon. For example, pressing hard on the Phone icon will bring up a list of your frequently used Contacts. Third-party apps such as Facebook also allow users to acces commonly used features from the Home screen such as writing a status update by using Quick Actions.

iPhone 6s and 6s Plus owners can use Quick Actions to quickly snap photos, take selfies or shoot video. Here's how:

Perform a hard press on the Camera app icon on your Home screen. This will open a pop up box with four options:

1. Take Selfie: Tap this panel to open your front-facing camera to snap a selfie.
2. Record Video: This option will take your directly to your camera to record a quick video.
3. Record Slo-mo: Record a slo-mo video at 120fps or 240fps depending on your settings.
4. Take Photo: Use this option to take a photo using your built-in 12-megapixel iSight camera.

iPhone 6s and 6s Plus owners can also use 3D Touch to view photos they’ve already taken while taking new ones. Just lightly touch any image thumbnail while in the Camera app to "Peek" at the existing photo. You can also use the scrubber to navigate through all the photos on your Camera Roll. To open a selected photo just press a little harder on your display to "Pop" it open.

Other stock apps such as Maps and Messages also feature quick action menus. Just press and hold the app icons on your Home screen to see which ones offer Quick Actions.

You can see a list of 5 great 3D Touch features here.