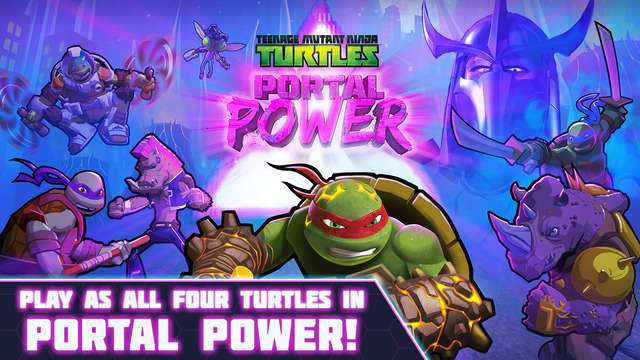 Nickelodeon released a new Teenage Mutant Ninja Turtle game after Michael Bay confirmed Kraang will be making an appearance in the upcoming live action movie being released later this year. TMNT - Portal Power for iOS is based on the Nick cartoon starring everyone's favorite turtles, Leonardo, Raphael, Michaelangelo, and Donatello. The game features the same voice cast and animation as the hit television series, and 5 different worlds and dimensions for players to conquer.

Portal Power is a side-scrolling street fighting game much like the original TMNT arcade release Turtles in Time. Players must use portals to travel to different dimension in an effort to stop Shredder and the Kraang from misbehaving. Players can play as all four turtles while battling the Foot Clan, Shredder, Bebop, Rocksteady and more. The game promises to feature easy swipe controls that both children and adults will be able to master. Players can also unlock additional costumes, power ups and moves while kicking and punching their way through never before seen enemies.

TMNT - Portal Power is available now on the App Store for $5.99. It supports all devices running iOS 8.0 or later. The game also includes IAPs for additional costumes.

The live action film, Teenage Mutant Ninja Turtles: Out Of The Shadows will land in theaters on June 3, 2016. The sequel will also include the Turtle's arch-nemesis Shredder, his daughter Karai and Bebop and Rocksteady.