Get the iOS 6 app switcher with VintageSwitcher 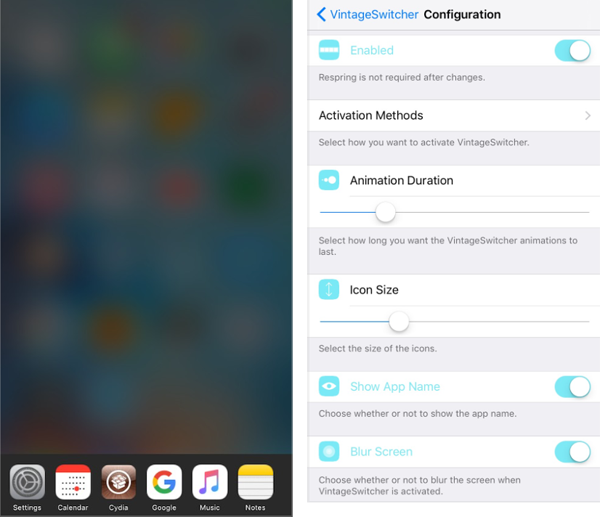 Once installed, the iOS 8 or iOS 9 app switcher is replaced by the classic iOS 6 style app switcher. This will not replace app icons, however they will be configured differently when the App Switcher is invoked. Unlike the recent app switcher design, iOS 6 did not show app preview cards, only the icons in a line along the bottom of the display.

VintageSwitcher doesn't operate exactly like iOS 6, in fact there are two improvements which modern users will appreciate. Instead of holding on an app icon and tapping the 'X' to dismiss, icons can be removed by simply swiping up on them. Another nice touch is a Clear All option, which appears when tapping and holding on an app icon.

There are several options to configure under Settings, such as Animation Duration, Icon Size, and more. An Activator action can also be assigned to open the app switcher. Otherwise the app switcher is invoked using the same method as normal, with a double press of the home button.

Another tweak that complements the vintage switcher is ClassicShutterAnimation, which reincarnates the classic shutter release animation from iOS 6. Unlike the old switcher, bringing back the shutter animation is purely aesthetic.

VintageSwitcher is free on the Cydia app store. To start customizing iOS, click here for instructions on how to jailbreak iOS 9 with Pangu. Find out how to purchase and install Cydia tweaks with this guide.