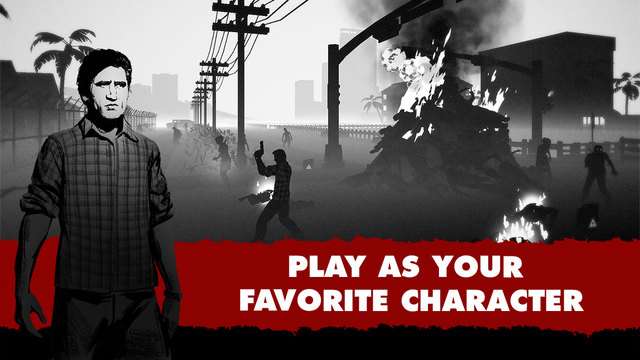 The first mobile title based on AMC's Fear the Walking Dead series is now available on the Apple App Store. The game is a "tactical runner" where players can flee across post-apocalyptic LA landscapes while trying to escape zombies. The game includes characters from the new show, over 40 weapons and the ability to run past your undead friends after they failed to escape.

The game is a black and white, side scrolling runner where you must blast through zombies using a variety of weapons. Sometimes it is better to run past zombies and other times it is smarter to blow off their heads. You must also choose the right weapon for the job. For example, the shotgun packs a powerful punch but it also slows you down. Each character comes with his or her own abilities, and you can purchase additional survival or character packs with extra weapons and tactical support.

The first episode of Dead Run is free and additional episodes are available as $2.99 IAPs. Some users are already complaining that paying to unlock additional levels for an endless runner is a bad idea, but others say that paying to extend the story is well worth the money.

Fear the Walking Dead: Dead Run looks great (see the trailer below), but at the end of the day it is still just a running game with simple tap controls. The game is available now on the App Store. It supports all devices running iOS 8.0 or later.