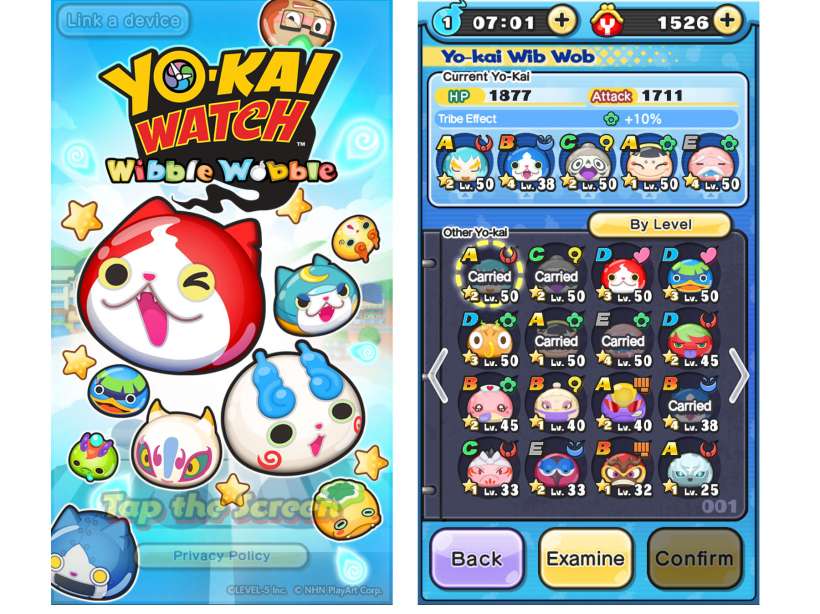 I'm shocked that Yo-Kai Watch Wibble Wobble has been struggling to find an audience. The latest tired Angry Birds game has managed to claw its way into the top 25 on the App Store charts, and Wibble Wobble is nowhere to be found. Wibble Wobble is a free-to-play, no IAP required, RPG/matching game that has so much replay value it is insane. I've been playing it nonstop for over a month and I can't stop collecting or training new teams of Yo-Kai.

I've pretty much covered everything you need to know in our Wibble Wobble Strategy Guide, but here's a quick refresher. Like Pokémon, Yo-Kai Watch is a series of roleplaying games published for the Nintendo 3DS which also became a popular television show in Japan and Disney XD. In the game you must travel around from town to town collecting different Yo-Kai to use in friendly matches against other Yo-Kai. What makes Wibble Wobble different than Pokémon is its matching battling system. Instead of selecting 1 Pokémon for one-on-one turned based battles, you select 5 Yo-Kai for a fast-paced matching battles. Each Yo-Kai has their own unique stats, tribe and finishing move. Like any good RPG, you earn Y-money and XP from competing in battles. The XP allows you to level up your Yo-Kai to make them stronger. You can also improve your finishing moves, and evolve some Yo-Kai in various ways.

The best part of the game is the hours that you can spend on training your Yo-Kai to create different teams for different scenarios. There are lots of hidden tunnels for you to unlock and explore, and each level has three stars with different ways to acquire them. For example, you have to win some battles with certain Yo-Kai on your team, earn a certain score or complete other tasks to earn all three stars on each level. Certain Yo-Kai have special moves that will help you complete these tasks, like Dracunyan, the vampire cat Yo-Kai. Dracunyan bites your icons (aka Wibble Wobbles) to turn them into himself. This is a great special move for when you need to link a certain amount of wibble wobbles at once. Other Yo-Kai can raise your score, make your enemy drop items and call on other Yo-Kai for help. These special moves may be useless while trying to take down a tough opponent, but they're great for trying to collect stars. I've spent a lot of time training up certain Yo-Kai just to use them to collect stars in the game.

There are daily, normal and event missions. Completing these missions will earn you extra Y-money, items and bonus Yo-Kai. You can also compete in daily Score Attack missions to see how high you can rank against other Yo-Kai players. There are special coins, secret Yo-Kai medallions, Yo-Kai medals and hidden Yo-Kai to discover and earn. There is so much to do in this game I could write about it for hours.

Yo-Kai is one the best games I have played this year so far. I haven't went back to unlock every level and earn every achievement in a game since the Kingdom Rush series. If you enjoy games where you need to collect and train over 200 characters while trying to win battles and earn achievements, then Yo-Kai Watch Wibble Wobble is the game for you.

Yo-Kai Watch Wibble Wobble is availble for free on the App Store. It does include IAPs and timers but they hardly ever affect gameplay. There are so many ways to earn more Sprit (AP) you will almost never have to wait to play or spend money.