Become a swiping samurai with these 5 Bushido Bear tips 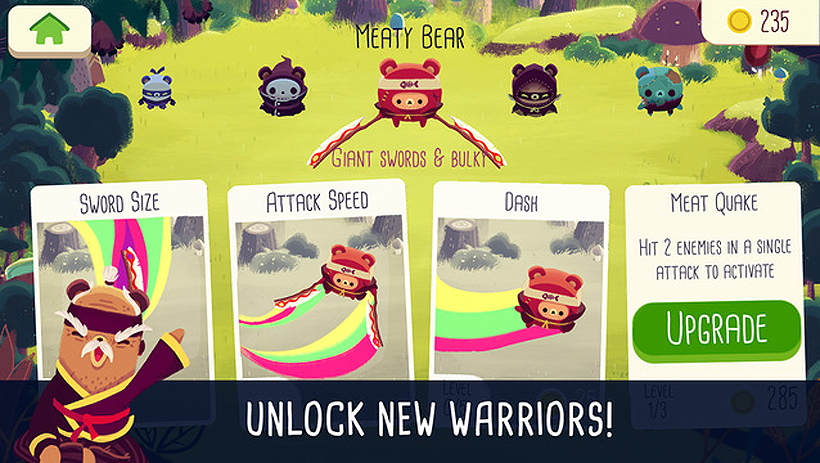 Though it has only recently been released, you can bet that it won’t take long before Bushido Bear becomes the newest gaming app sensation.

This clever new game from developer Spry Fox, LLC asks players to defend an ancient forest by attacking the demonic creatures trying to invade it. Unlike other action games that would have you face your foes head-on, Bushido Bear takes a more subtle approach by making you swipe a path between your enemies that will allow you to attack them when you’re done. This mix of action and puzzle elements combined with the game’s charming visuals and sound design makes Bushido Bear a difficult game to not fall in love with.

Actually, it makes Bushido Bear a pretty difficult game all-around. The wave-based level design of Bushido Bear means that the game intends to take you down at some point but, before that happens, expert players will be able to hold out until the game’s later stages and reap the considerable awards that such progress yields.

Though truly mastering the game’s unique combat will require hefty doses of time and patience, there is no better place to start your training than by consulting these five tips.

Be careful when tapping

Tapping your screen in Bushido Bear will teleport your character to the point you’ve selected. While this can be very useful when you’re trying to dodge projectiles or collect an item, it can also put you in spots of danger when you’re not careful.

It’s very difficult to make an attack pattern swipe without having to tap the screen to do so. Many times, this tap may send you far too close to the enemies that you intend to attack and end your fight before it even starts. While it is possible to perform a swipe that doesn’t transport you, the far easier method of avoiding this hindrance is to make sure that your attack movement doesn’t start so close to the enemies.

By allowing yourself a little buffer room, you can avoid a great number of accidental deaths.

Invest in the right upgrades

Not long into your Bushido Bear adventure, you’ll be presented the opportunity to upgrade your character with coins you’ve earned in battle. As soon as you have the funds to do so, you should take advantage of this option.

While there are benefits to building on your character's strengths, the early upgrades should go to addressing their weaknesses.

Although the plan of attack is always to draw the perfect line that will allow you to take out your enemies in a single run, that is often not an option. Instead, you will have to make multiple attack runs to get all of your enemies.

As that is the case, be sure to account for where an enemy is going to be when you are attacking. Even though that foe may not be in your way now, by the time you start your attack you could accidentally find yourself in harm’s way if they so happen to step directly in your path.

Because of this, it is always best to make sure that you do not get too careless with your movement plans and continuously leave yourself extra room when drawing your attack plan.

Use the pre-attack stage to your advantage

Before each wave begins, you will see a series of multi-colored circles that correspond to what enemy type is going to spawn where.

It’s vital to use this information to its maximum potential. Being able to draw your attack before your enemies are even on-screen is as close as you’ll come to having a true advantage in this game. In fact, this narrow window is often the only chance you will have to design a perfect plan of attack that generates maximum rewards.

Though not every enemy formation will offer you the chance for a perfect attack run, even getting a couple of kills from the set-up is always worth your effort.

Although the nature of Bushido Bear’s gameplay often leads to fast and furious action, it’s important to remember that this is not a game about speed. In fact, moving fast is often the fastest way to lose.

Instead, take advantage of the way the game allows you to plan your attack by actually taking the time to plan your attack. Even the most chaotic waves offer a little breathing room and using that room to consider your next few moves will greatly enhance the odds of winning the battle.

Unless you’re immediately in harm's way, a few extra seconds will almost always be worth a few more downed enemies.

Bushido Bear is free on the App Store and requires iOS 8.0 or later to install.