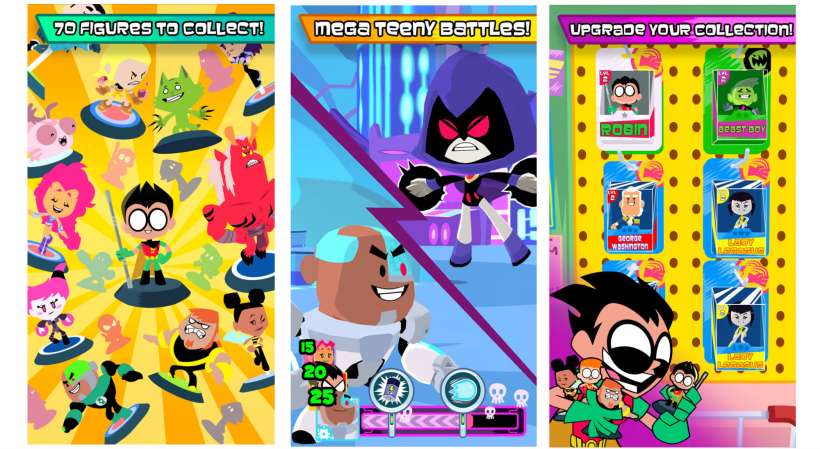 As promised, Cartoon Network and Grumpyface Studios has released its "figure battling RPG," Teeny Titans to the Apple App Store. Teeny Titans is a Pokémon-style game where players collect different action figures from the Teen Titans universe. In a demo video posted by Touch Arcade, Grumpyface Studios describes the game as a "parody of the Skylanders and amiibo action figure collecting craze." The goal of the game is to collect the 70 action figures based on Teen Titans Go, Young Justice, the 80s Teen Titans and other characters from the DC universe.

What separates Teeny Titans from other character collecting RPGs, like Pokémon, is its real time battle system. Players can select up to three of their action figures to fight against other NPCs in the game. Instead of the typical turn-based battle system, players use a battle bar to unleash specific moves. Players can also collect random items that pop up and you can easily switch out characters. The battle system is a lot quicker and has a more involved feel than other turn-based RPGs. The defensive and power ups also seem to be more useful in Teeny Titans than they are in Pokémon. You can see this at the 3:25 mark in the video posted below.

The game features a randomly generated hub world where you can collect coins and battle other citizens. Teeny Titans also includes side quests, cool DC Easter eggs, and really cool interactive random toy stores where you can purchase additional figures for your collection. One feature that stood out during the demo is the trophy room, modeled after Super Smash Bros., where you can add additional chips to your action figures to give them a boost.

Teeny Titans features 70 quests, 6 tournaments, different districts to unlock and it offers around 10-13 of playing time. Teeny Titans is available now on the App Store for $3.99. It supports all devices running iOS 7.0 or later. We will have a more in depth look at Teeny Titans on Friday as part of our App of the Week.