But wait, there's more! There are still some details about the iPhone 3G S that were not announced at the WWDC keynote speech. In fact, we're betting that even more information will be revealed when the new model actually hits the streets on June 19th. 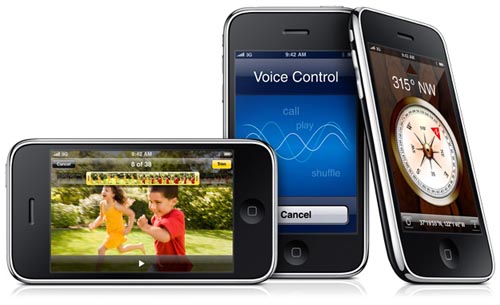 Apple did not mention the specifications of new hardware in the iPhone 3G S on Monday. Turns out a T-Mobile site in the Netherlands has verified that the RAM has been doubled to 256 MB.

The "S" stands for speed, hence the 600 MHz processor with more cache and a dual-issue front end in the iPhone 3G S. The prior model iPhone 3G had a processor clocking only 412 MHz. This increase in processor speed does not translate to a linear increase in responsiveness, which is why Apple has correctly stated the iPhone 3G S will perform basic functions twice as fast as the older model.

Support for OpenGL ES 2.0 was noted at WWDC, however what Phil Schiller did not explain was that the PowerVR SGX graphics processing unit was inside the iPhone 3GS.

How about the oleophobic screen coating on the new model iPhone? The what? Apple's technical specifications page for the iPhone 3G S explains:

That's right, the iPhone screen has your back. It will resist the oils in your skin and help to prevent fingerprints and smudges. Instructions for the iPhone 3G described cleaning your iPhone touchscreen with a damp cloth.

No more. The iPhone 3G S would prefer to be cleaned with a dry cloth. Take that, Palm Pre.

We can't wait until someone with lots of money and free time on their hands pre-orders the iPhone 3G S and deconstructs the device for fun and profit. What else does Apple have up its sleeve?

Only a few more days until the release on July 19th.