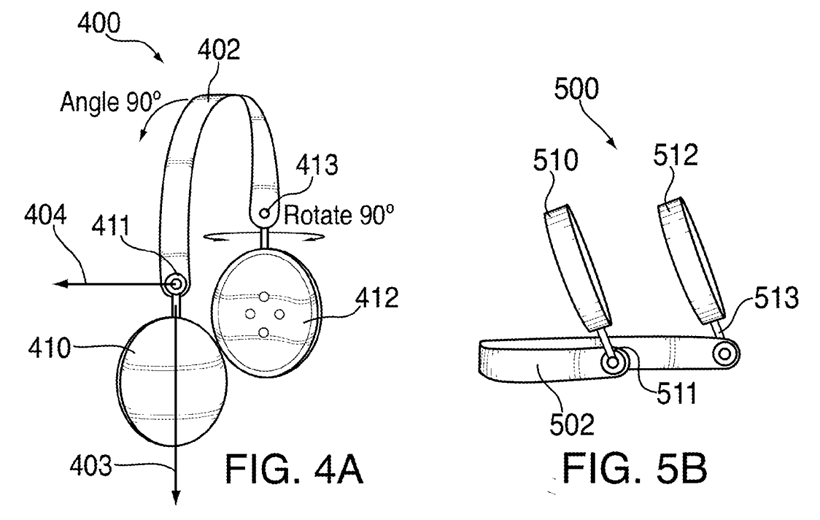 Apple may be working on headphones that double as loudspeakers, as revealed by the recent patent titled "Dual mode headphones and methods for constructing the same". US Patent Number 9,565,490 is dated February 7, 2017 and shows designs similar to current Beats headphones and EarPods. The difference is that flipping the speakers around converts them into amplified speakers for in-room listening.

The volume would be limited by sensors within the headphones, which could determine when they are placed on a listener's head. This would prevent loud playback directly into someone's ear. AirPods already feature several on-board sensors to determine when they are in use. Over the ear models could flip around, providing a way to stand the speakers up while they are being amplified and detecting which mode is appropriate. Apple has also detailed buttons that would switch manually between speaker and headphone mode.

Apple already uses similar technology in its iPhone 7 and AirPods. The iPhone 7 features stereo sound thanks to a dual mode earpiece speaker. The same speaker that provides sound during a phone call is amplified and used as a normal speaker when the iPhone is playing audio.

As AppleInsider notes, AirPods can play a loud sound to help owners find them in case they are misplaced. As long as the earphones are within Bluetooth range this feature provides an audible signal from a distance. This dual mode feature will arrive with the release of iOS 10.3, which is currently in beta.

Assuming the dual mode headphones are wireless, this accessory could provide an all-in-one solution for those in the market for a Bluetooth speaker and headphones for private listening. Of course, like most Apple patents there's no telling whether or not the company plans to launch a similar product in the near future.