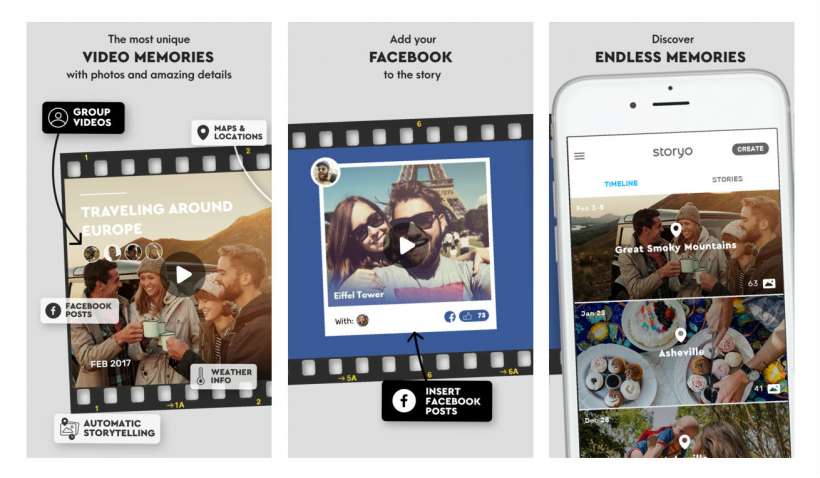 The photo memory app, Storyo has been updated with a new group memory option that allows users to collaborate with friends and family to make video collages using their favorite photos. Storyo uses photo metadata to create "lifestory vignettes" of your family vacations or other favorite memories saved on your Camera Roll. The app also utilizes social media and other sources to add additional details to give each video its own unique story.

The app basically suggests videos based on photos tagged with similar dates or locations. For example, when I open the Storyo on my device it suggests a "Monmouth Beach video lifestory" based on an photo my friend sent me from her vacation. If I tap the suggested story panel is creates a video with all her images from Monmouth Beach. The app adds music, times and dates, and it even creates a little map to show locations.

With Storyo 2.0 users can now create group video memories. After logging in to Facebook, users can invite friends and family to share images to be used in a video collaboration. The app can help gather everyone’s photos from a specific time frame, so you don't have to search through hundreds of unrelated photos.

Users can also create their own videos by personally selecting their own photos and allowing Storyo to do the rest. The app utilizes its own proprietary algorithm and artificial intelligence to create "complete cinematic lifestories in 15, 30, or 60 second clips," according to the app's developers.

Storyo version 2.0 is available now for free on the Apple App Store. It supports all devices running iOS 10.0 or later.