How to check if your apps will work in iOS 11 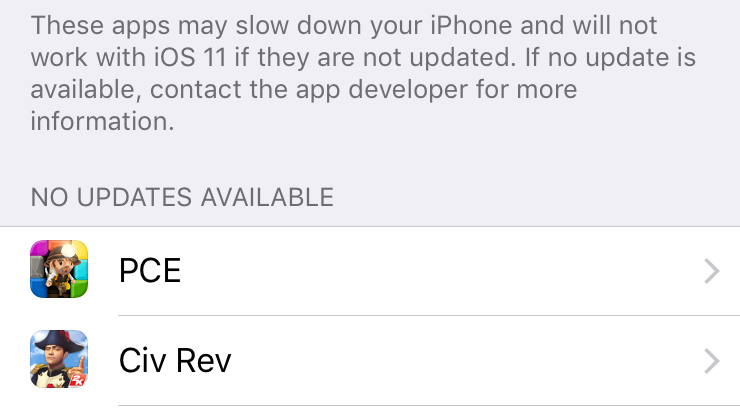 The 32-bit apocalypse is right around the corner. In case you missed the memo, Apple will stop supporting 32-bit apps with the release of iOS 11. This means 32-bit apps will not open on devices running iOS 11 or later. Instead users will see a pop-up informing them that the app needs to be updated to 64-bit for it to work on their device.

While most apps will not be affected, and some developers have promised to issue updates, other developers like Plants vs Zombies creator PopCap have announced they will be pulling older titles from the App Store. Apps deleted from the App Store will still appear on your device however, so you may want to check which ones will become useless in a few weeks when Apple is expected to launch iOS 11.

To check what apps on your device are not supported in iOS 11 navigate to Settings > General > About > Applications. Here you will see an app compatibility warning from Apple with a list of unsupported apps installed on your device. This will affect iOS users who were holding on to older apps like Flappy Bird, and it will make some older favorites useless unless you choose not to upgrade. This also means these apps will not work on next-generation devices like the rumored iPhone 8 expected to launch this fall.

You can always keep an older device to play unsupported games, but it is probably time to start searching for replacements for your favorite apps that are not moving forward.

Apple is expected to launch its next-generation of iPhone models along with iOS 11 sometime next month.