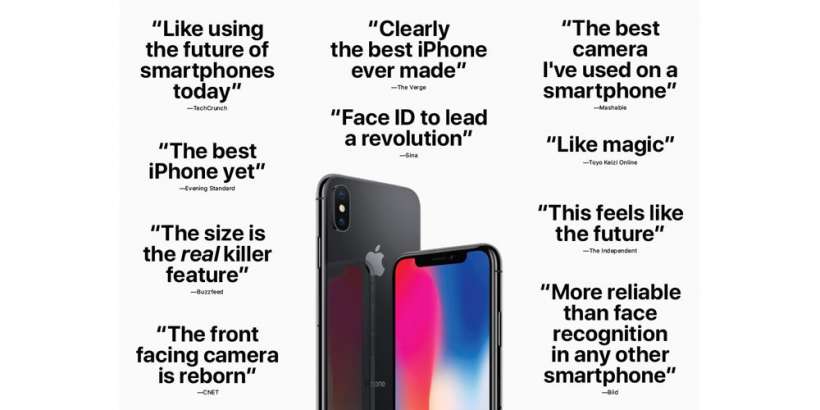 Apple today has released a press release featuring a list of positive comments for the iPhone X. This is very unlike the iPhone maker who is normally not known for relying on critic endorsements. The press release includes several quotes from popular blogs and tech sites praising various features of the newly released iPhone.

BuzzFeed and The Wall Street Journal both note how well Face ID works, while Creative Live Blog calls the new OLED display "insanely good." Apple even included a positive quote from TechCrunch about the "cute and funny" Animoj feature.

Apple is normally known for relying on its products to sell themselves, but this year the company seems a little more apprehensive. Apple has not only recently added celebrity endorsements to its advertisements, but it has also leaned on lesser known YouTube personalities for positive iPhone X reviews. Bribing YouTube users is typically a technique utilized by marketing firms peddling makeup, video games or bad horror films.

Many mainstream publications were only given a day or two to review the iPhone X. Some believe this was Apple's way to force reviewers into only focusing on new features instead of giving honest opinions about every day usage with the device.

While the press release with positive quotes seems a bit desperate, Apple may have turned to YouTube to try and reach a younger audience since their original fan base is aging. Bloggers have lost a lot of credibility over the last few years due to a variety of scandals and claims that they do not publish unbiased reviews.

Apple may be nervous that consumers are waiting to see what other people are saying about the new iPhone X features before deciding to purchase the new device. New features are typically known to be buggy and not that reliable at first launch. The high price tag of the iPhone X also may discouraging some Apple fans to upgrade to the new flagship device.