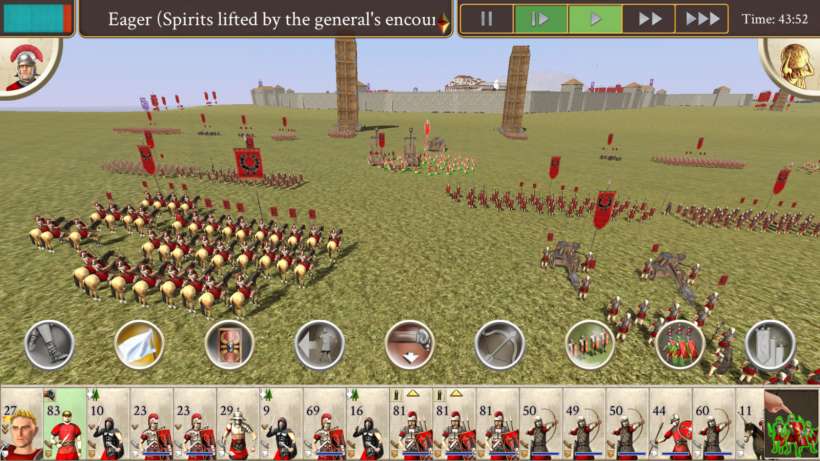 For those who have never played Total War, it has been around since 2004 originally released by Activision for the PC. In the main game players control one of three Roman families during the mid and late Roman Republic. Total War is a real-time strategy game with turn-based tactical battles. Barbarian Invasion takes place three centuries after Total War.

In Barbarian Invasion, players assume control of 1 of 18 warring factions defending an overstretched Roman Empire from invading barbarian tribes. Players can also invade the Roman Empire as part of the Hordes feature. The iPhone and iPad versions include touch-controls and mid-battle autosaves, which will come in handy when switching devices.

Rome: Total War - BI is available on the Apple App Store for only $4.99. Check out the trailer for the iPhone version below.

Hopefully, Alexander will be up next for iPhone support.

• Unlocks 8 more playable factions for a total of 18

• Battle UI can be hidden, allowing greater control over unit paths and formations (tap with two fingers to hide/display UI)

• First Time Help system; help appears automatically whenever you access a new screen or attempt a new action (can be enabled/disabled via in-game options)

• Track your progress in Historical Battles; receive bronze, silver or gold ratings depending on what difficulty you completed the battle

• Improved Battle status info; status info can be toggled to appear above each unit, and shows unit alignment (friendly/hostile), unit type, health, current orders, morale and ammo, along with their current path

• (iPhone only) Scrolling tooltip ticker; key information scrolls along the panel at the top of the screen

• (iPhone only) Retinue lists; easily track which followers are attached to which characters

• Optimises graphics and UI for the iPad Pro (11", 3rd generation)

• Uses the Metal graphics API instead of OpenGL

• Fixes a number of minor issues