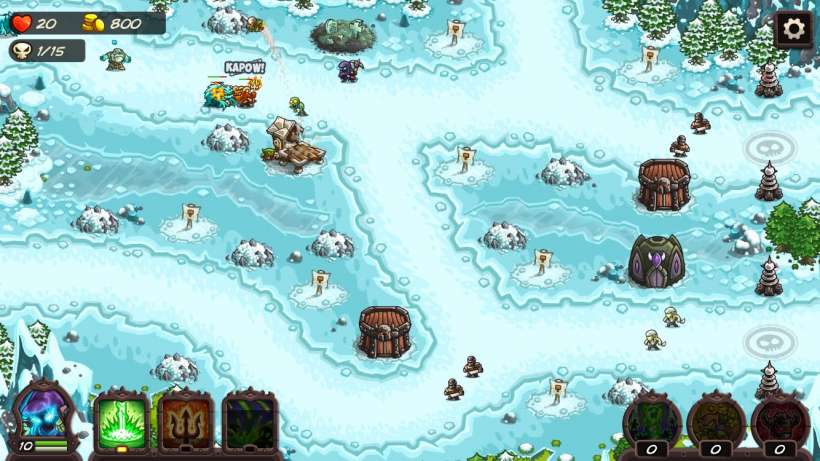 We typically don't review app updates but I wanted to address the difficulty of the new levels in Kingdom Rush Vengeance. I have played the Kingdom Rush games since the early days when the original was a free flash title. Kingdom Rush and its sequels have always been challenging, but possible to complete without the aid of purchased items. While there is nothing wrong with using items or purchasing additional heroes, it was possible to complete the first few games without having to do so. Vengeance, however, is so difficult it seems impossible to earn all 69 stars and complete the challenge modes without heavily stocking up on items, like Vez'nan's Wrath.

I have replayed the two new campaigns, Subaquatic Menace and Frozen Nightmare, many, many times, and I cannot earn 3-stars without the aid of items. I have tried every combination of towers, bought new towers, and studied the levels over and over. The only thing I have not tried is purchasing new heroes, because to be honest, new heroes can be a total waste of money. I like a challenge but I feel like the balance of difficulty may be a bit off in Vengeance, especially when it comes to the mini-campaigns.

The recent controversy of game difficulty is not lost on me, but I don't think Vengeance being a challenge is due to my lack of skill. I just think the game is designed so you have to use items, which can feel like cheating. Yes, earning rubies is harder, so stocking up on items takes a bit more work, but that doesn't make Vez'nan's Wrath any less devastating. Being able to wipe out an entire screen with one tap isn't what made the first 3 Kingdom Rush titles fun.

There seems to be a disconnect between the available towers and enemies. In the earlier games each tower had abilities that countered your enemies different skills, like fast archers with range to take down fast enemies. In Vengeance, there doesn't seem to be the right balance of tower abilities. What am I supposed to do against frogmen when they're too strong and many for my guards? How am I supposed to stop fast flying creatures when my archers are too slow, weak and have no range? The lack of an enemy Encyclopedia is also a problem. Being able to look up enemies and their weaknesses was a big help in the earlier games. I don't even know the names of enemies because I can't refrence them anymore.

I'm not complaining about a challenge, but there are only so many solutions to tower defense games. If my towers can't stop my enemies there isn't much else I can do then drop a Vez'nan bomb on them. I'm just afraid in an attempt to keep the fourth game in the series interesting, the developers may have made items too important. Having to save up rubies to wipe a board clean because my enemies are unstoppable is not what made the first 3 games so addicting. Finding the right combination of towers and special abilities of those towers to stop your enemies is why the Kingdom Rush considered one of the best tower defense series.

Let us know if you agree in the comments below. Is Kingdom Rush Vengeance, especially the first two mini-campaigns, harder than the first three games, or am I just a failure?