Sure the next iPhone could be revealed in a few short weeks at WWDC in early June, but why wait when you can get one now? Apparently it doesn't take long to manufacture a complete knock-off of the iPhone 4 after a few photos hit the Internet. 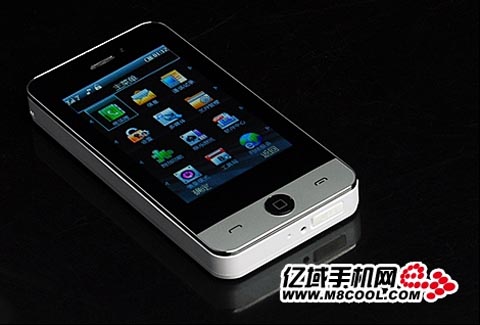 This incredibly un-iPhone like iPhone clone has features that Apple's official devices lack, such as dual SIM card slots and a removable battery. Shenzhen City is notorious for it's electronics cloning industry and over 400 companies are said to participate in the business.

Too bad there's no A4 iPad processor in this iPhone 4. The device does have a front-facing camera, supports 3G and even comes with its own stylus. Take that, Steve Jobs!

Now that Apple has lost two iPhone 4 prototypes, the silver, rounded edges and flat back are familiar-looking. No doubt the model pictured above can be had for a much lower sticker price than Apple's official products (or for that matter a $5,000 prototype left in a bar).

WWDC takes place from June 7 to 11, and Apple has already announced that iPad and iPhone Apple Design award winners will be revealed at the conference. With iPhone OS 4 already on the table, it's likely the new iPhone will be officially launched.

i have bought this phone from china,Although this is a copy one, but the quality is very good,just cost $99,
http://www.esaleschina.com/dual-sim-3-5-inch-touch-screen-wifi-java-air-phone-4th-2310.htm