The 2.0 hack was completed by the iPhone Dev Team, and the hole that was found is described by the Dev Team to be considerably difficult for Apple to close. According to Gizmodo, the hole may be considered "impossible" to close.

The hacked 2.0 firmware allows any GSM carrier and the installation of any third party software. Watch the video below to see the 2.0 iPhone in action

Countless users have taken advantage of the AppSnapp jailbreak method which provides jailbreaking in a single step just by visiting a website from your iPhone. That website, incidentally, is jailbreakme.com.

A few days ago we told you about AppSnapp, a single-step process for jailbreaking iPhones running firware version 1.1.1 that doesn't require a PC and improves the overall security of your iPhone. With all that going for it, it comes as no surprise that AppSnapp was, to say the least, very well received by the iPhone community.

According to iPhoneAtlas, in the three days that have elapsed since AppSnapp was released and made available to iPhone users via jailbreakme.com, almost 150,000 users have used 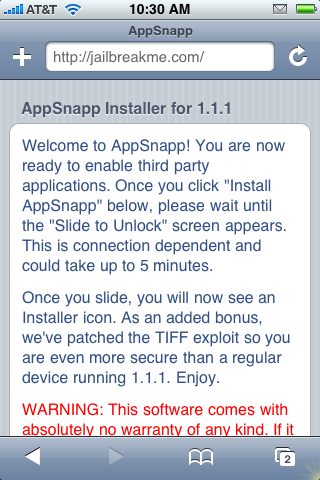