Smash Hit was one of our favorite iOS games of 2014, and its developer is back with a new "strategic driving" title. Mediocre Games last week posted a video titled "new project teaser" to YouTube. The official description reads, "a strategic driving game where you are your own worst enemy".

The untitled project doesn't look anything like Smash Hit. The goal of the new game seems to be not to hit yourself. As you can see from the video above, you must avoid the car you previously just drove. Each time you avoid a past version of yourself a new car is added to the board, until there are so many cars driving around that things becomes pure chaos. Hopefully, Mediocre plans to give a better explanation soon because they definitely have our attention.

It may seem a bit premature to declare Smash Hit the best game released to the Apple App Store this month, but it is hard to believe that something more addictive and entertaining will take its place on my iPhone before March is over. I have to admit that it was a tweet by The Verge, and free price, that led me to download the game in the first place. I hadn't intended to review Smash Hit but after picking it as our "Game of the Week" in our weekly recap, I decided it needed more attention because it is just too fun to ignore. 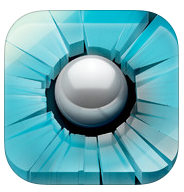 Smash Hit is an easy to play but challenging game where you must throw balls at glass obstacles that get in your way while flying through different 3D dimensions. You begin the game with 25 balls and can collect more by smashing blue crystals scattered throughout the various levels. The game is over when you run out of balls.